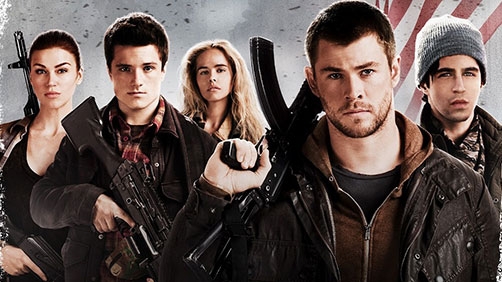 How long would it take for the North Koreans to zip across the Pacific pond, invade the state of Washington, and set up camp? Well, the timeline is a little murky, but apparently not very long. Also apparently, the United States Military will do absolutely nothing about it. And best of all, a group of kids and their girlfriends led by one U.S. Marine will be able to do something about it.

And apparently, earth’s anchor or whatever holds it still will become unhinged when this happens, because the world shakes… A LOT! I was so dizzy and sea sick when this film was over I wanted to just lay down on something steady, put a cool cloth on my head, and close my eyes for a while. And no I’m not joking. The shaky cam was so bad I was literally nauseous and dizzy when the film was over. Whatever merits this film may have had, this one thing completely took over and ruined the experience for me.

Please understand as we dive in, I wanted to see the original Red Dawn for comparison’s sake but have been unable to thus far. So this film will stand or fall on its own merits for the sake of this review.

North Koreans are Mean… or something So how does tiny little North Korea, estimated population of ~25 million, find the resources to invade and take over Washington state? This is the question I found myself asking in the theater. At the time I did not know what I know now. When the movie was written and subsequently filmed it was the Chinese who were the antagonists. Then the studio responsible for the film (MGM) went bankrupt and emerged from bankruptcy as a different company with different goals, and different controlling interests. Some of the marketing eggheads realized that China is a pretty big market for American films but North Korea… well not so much. So scenes were reshot, digital incantations were made over the film, and the villains become North Korean without much thought given to that likelihood or how it would affect the story.

From the moment the film’s opening montage appeared on screen, it seemed like little more than a mishmash of images — a cacophony of quick cuts, incongruent visual styles, and lots and lots of shaky cam style cinematography. As anyone who has been following my work up to now will know, I am going to have a lot to say about this, and it isn’t going to be good. I’ll try to give you the reader’s digest version and spare you my lecture.

In short, good choreography and well fleshed out story are thrown out the window and replaced with poor camera work and quick cuts to try to propel the story along. And it fails on many levels. It’s unfortunate because I went into the film wanting to like it, trying to like it.

And by senseless, I mean making no sense. As I said, the timeline is a bit murky, but it appears these kids get years of training in the course of a couple weeks while the years of training the North Korean troops would have had seems to be useless to them — they appear to be vulnerable and defenseless before the advancements of these teenagers. Conversely, the untrained teenagers can handle with ease high powered weapons they have likely never seen before in their lives expect for perhaps on movie screens — automatic weapons, machine guns, armored vehicles, you name it. This film is led by two performances, Chris Hemsworth as Jed Eckert, the only one of our noble heroes with training, and Josh Peck as Matt Eckert, his whiny brother.

Hemsworth was, as usual, great. I cannot fault him in any way. It almost makes the film worth seeing. Josh Peck on the other hand was absolutely horrible! Peck as Matt Eckert is arguably the lead of this film as it turns out, the story is really all about him (even though Jed [Hemsworth] seems to be as much the focus as anyone). The story is supposed to be about his whiny journey from girlfriend obsessed boy to leader material man but I never bought the transformation. I found him annoying at best, and major detriment to the team at worst. And the overacting and over-emoting is not easy to get past.

The other characters were pretty forgettable, and there was something off about the 3 Marines that come in to play later in the film. Their toughness was overplayed for comedy and it didn’t work well.

In the end, this film seems uninspired and unmotivated and I have no idea what compelling story the filmmakers wanted to tell that warranted remaking this film. I wouldn’t bother watching it in theater if I were a general member of the audience.