‘Revenge of the Sith’ as Great Work of Art 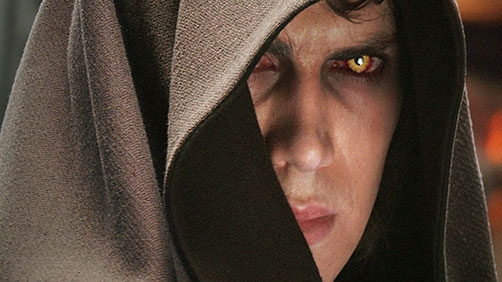 Yes, the long finale of Revenge of the Sith has more inherent artistic value, emotional power, and global impact than anything by the artists you name. It’s because the art world has flat-lined and become an echo chamber of received opinion and toxic over-praise. It’s like the emperor’s new clothes—people are too intimidated to admit what they secretly think or what they might think with their blinders off.

Lucas called this fierce fight [at the climax of Sith] between Anakin Skywalker and his Jedi master Obi-Wan Kenobi “the turning point of the whole series.” Fire provides the sublime elemental poetry here, as water did on the storm-swept planet of Kamino in the prior film, Attack of the Clones. Lucas said he long had a mental color image of the Sith finale, “monochromatic in its red and blackness.” The seething reds and yellows of the great lava river and waterfalls (based on Niagara Falls) flood the eye. It is a vision of hell. As in Dante, there is an allegorical level: “I have the high ground,” declares Obi-Wan when he springs to the top of a black sandy slope. Hell, as in Marlow, Milton and Blake, is a psychological state – Anakin’s self-destructive surrender to possessive love and jealous hate.

Sure, Lucas can talk like that about the film, but it doesn’t make it so.

Personally, while I think Revenge of the Sith is watchable, I in know way find it to be anywhere near a great work of art. That’s just insane.