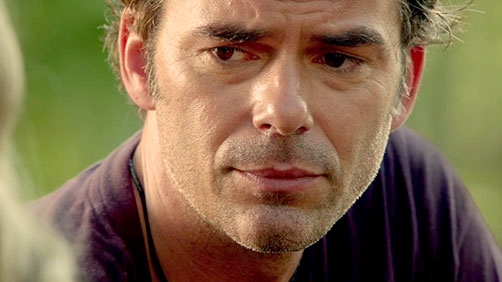 HOW WILL MILES AND MONROE’S FACE-TO-FACE GO? | The former friends come together in the midseason finale, and it “gets really fun,” teases Burke. The meeting “happens in a very unexpected way, just a brilliant and a creative way on the writers’ parts… It’s tough because there was a point… during the past 15 years where Miles did try to take him out and overthrow [him]. Two lifelong best friends, brothers, having had that happened, coming back together, it’s tough.” In the new year, Burke says, we’ll even glimpse “some flashes of Miles and Bass several years after the blackout.”

WHY DID THE POWER GO OUT?! | Answers are coming! “One of the things [creator Eric] Kripke’s been talking about from the get-go is not to build expectations so high that you can’t fill them. The reason that the power went off, it’s a central theme in the show, but we’re going to reveal that sooner [rather] than later so it doesn’t have to be this enormous, mind-blowing [moment of], ‘Oh my God!’ It’ll be interesting enough to make sense and move the story forward from there.” To that end, Monday’s episode will feature “information revealed about the blackout that we wouldn’t have thought of,” previews Burke. So far, the amulets have turned on the electricity just a little here and there, powering objects like an iPhone or a lighthouse, but “imagine if that were amplified a little bit, bit by bit,” he hints.

Seems wise if you aske me.

So we’ve got the episode tonight, and one next week, and then the show is on hiatus until March 25.

As a bonus, here’s a cast interview.