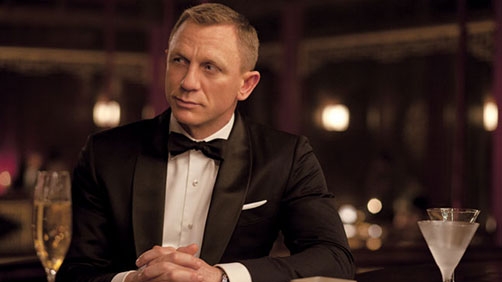 I must admit I really toyed with the idea of titling this review “Skyfail”, but that would be low hanging fruit, not to mention it would not completely reflect my opinion of this film.

Let me help you see where I am coming from. I have determined that I am somewhat immune to movie hype. Not completely, not even mostly, but immune enough. I can wade through the hype and figure out whether I think a film is going to be any good or not. Sometimes I am wrong, but more often I am right.

Two of the things with Skyfall that I was very aware of were 1). The hype surrounding this film had reached a fever pitch by the time I got to the theatre to see it. The critics were raving, as were the audiences. And 2). I really liked what I had seen of the film’s promotional materials — the trailers and featurettes. It really looked like a good film.

So I tried to put all that aside and judge the film based on it’s own merits and weaknesses. And my conclusion was and is that Skyfall is a fine film and worth seeing. It’s worth the 3.5 stars I give it.

On the other hand, the trailers and other materials led me to believe this was going to be more along the lines of a 4.5 star film. And on that level I felt a little let down.

And then I thought about the film in relation to the critics and general audiences, both of which are praising the film liberally. And I don’t fully understand what is motivating the glory, laud, and honor being bestowed upon this “decent, but not great” film.

There can be no doubt that whatever the failings of Skyfall are, the expertise in filmmaking is not one of them. In fact the cinematography of Roger Deakins is absolutely best in class. And I really think part of what makes the cinematography so great is because it’s old school. What I mean by that is the action is not driven by the camera work. The camera is there to capture the action, not to provide it. Sam Mendes said recently in an interview:

The camera doesn’t move that much. The action is moving, and the camera moves with it. It’s not just moving for the sake of moving.

This alone, in my opinion, raises the film a level above so much other cruft out there. Of course I would be remiss in speaking of the cinematography of Skyfall if I didn’t mention the Shanghai sequence. What an exercise in masterful filmmaking. The sequence I’m speaking about of course is when Bond hitches a ride under an elevator to track down an assassin. The sequence moves on to an area with a lot of glass and lights. It’s an exercise in pure artistry.

And then, there’s Scotland. Ah, Scotland, land of the beautiful scenery it seems. And while we are in Scotland, why not blow up a house at night? Which of course provides a catalyst for some beautiful orange lighting. It is spectacular.

One thing that was extremely refreshing after the previous two Daniel Craig installments in the Bond franchise is the fact that this film is character driven as opposed to action driven. The first Craig Bond film, Casino Royale was an exercise in poor pacing, with the first half of the film being eaten up by nearly non-stop action, and the mid through late portions of the film being so unbearably dull that I wanted to fall asleep. And Quantum of Solace, though not as bad, was still poorly paced and fairly forgettable. Skyfall is refreshing in these areas in that I feel the film is well paced between the action and the more character driven moments, plus we learn more about who James Bond is and what drives him, we learn more about M, and we get a decent villain. In fact, M (played by the wonderful Judi Dench) takes a very front and center place in this film. It is a great swan song for the character, and having her so front and center makes the film better in so many ways.

And you can’t talk about the character driven nature of Skyfallwithout talking about Silva (Javier Bardem). He is great. In fact, without going into my dislikes just yet, I wanted more of him. He doesn’t get the screen time he deserves. On some levels, director Mendes seems to want to evoke the same sort of villain that Christopher Nolan did with the Joker. And to some degree he succeeeds. He’s certainly the best villain of these three Bond films.

One of the things I found somewhat peculiar is the approach to make Bond more human by making it out that he is starting to get too old. It’s peculiar because it seems like we only just introduced the Daniel Craig Bond, we saw his origin story, and we don’t feel like we have seen him in action all that much.

Personally, I think the “getting to old for this” plot device is a fine device in a lot of instances, but I feel like it is too early for Bond here. Maybe in two or three more movies it would have been okay, but it felt weird to me here. But it was at least effective in furthering the plot. It creates a bit of tension for us and we really do wonder if Bond is up for the action.

Of Silva and Letdowns I’ve alluded to this already, but I didn’t think the execution of Silva as the villain worked as well as it could or should have. Yes, he’s the best (Daniel Craig Bond) villain to date, but if Mendes was going for a more Batman Joker style villain, he missed the mark a little bit. As far as I’m concerned, Silva doesn’t get enough screen time, and therefore not enough tension builds between him and Bond.

And at first, it appears that Silva has everything masterminded down to a tee. But then it turns out he forgot to do some major planning toward the end because his big old master plan was to show up in a helicopter and shoot a lot of big guns and blow up a house. It seems really rather run of the mill for a villain trumped up to be a big bad, nearly undefeatable guy.

And seriously, did we have to pull out the “Last Stand” plot device in such a cliched way? And then, what just happened? Did we get transported into the film Home Alone in which we defeat the bad buys by booby trapping the house?

The film also goes to a lot of trouble to establish Silva’s computer hacking skills, and a lot is made of his massive security breach into MI6 — which seems to be a big deal at first, but later the film doesn’t really care about.

In the end, despite Bond’s best efforts, M doesn’t pull through. Essentially, the entire thrust of the movie fails. That’s it, pack it up and go home. It turns out James Bond really is too old, so let’s send him out on some more missions… really? Seriously? Give us a little more than that, seriously!

In the end, as I said, I consider it a 3.5 star film, which means I will certainly watch it again. But I also feel that many opportunities to turn this into a really great film were missed.

On the other hand, of the three Daniel Craig Bond films, this was certainly the best, which indicates to me that the franchise is on an upward trend. That’s encouraging and I am looking forward to seeing what comes next.