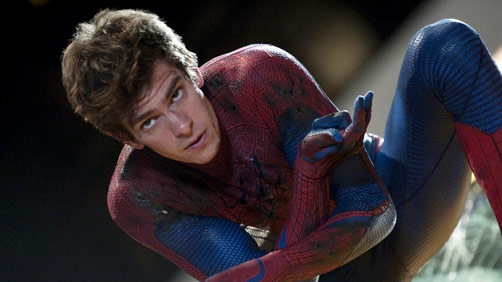 Does it reach the same mind-boggling heights as Batman and The Avengers? Not quite. Does it live up to its title? Oh yes.

Along Came a Spider

In 2002, Sam Raimi brought our webslinger to the big screen for the first time with Spider-Man. It was good, clean fun - and not much else. The real treasure came with 2004’s Spider-Man 2, a sequel which surpassed its predecessor in just about every way. Richer story, deeper characters, better visuals, and some terrific action — who can forget the train sequence with Spidey and Doc Ock?

Raimi’s last Spider-Man film is one I wish had never been born. What a mess. What a tedious, choppy, underdeveloped mess. Let’s face it: friends don’t let friends watch Spider-Man 3. When The Amazing Spider-Man (directed by Marc Webb) hit theaters early in July, some dismissed it as pointless: why reboot the franchise a mere five years after the conclusion of the original series? But I couldn’t have been happier. Here was a chance for Spidey to redeem himself, to prove that we could still take him seriously as a superhero.

And prove it he did.

One common complaint about this film is that it simply rehashes the story we got back in 2002. I have to disagree. While The Amazing Spider-Man does cover some familiar ground, it’s still a different interpretation of Spidey’s origins — one which is grittier and far more grown-up.

At the core of both films is young Peter Parker and his development from nerdy, troubled teen into true hero. This development occurred rapidly in Raimi’s film, but Webb puts the character through growing pains. Parker’s transition from troublemaker to city-saver is dark and full of screw-ups, but when it does happen, there’s a genuine sense of triumph. As one man put it, nothing is sweeter than the thrill of victory after the agony of defeat.

I must also say I love Webb’s casting. Andrew Garfield steps into the titular role and makes it his own. He doesn’t just play Spider-Man — he is Spider-Man. I had some doubts about Emma Stone as Gwen Stacy, but she’s right on target. Rhys Ifans delivers a chilling yet sympathetic performance as Dr. Curt Conners (aka The Lizard) — the best Spidey villain since Doc Ock. And Martin Sheen in the role of Uncle Ben? What more could you ask? The stunts are choreographed with aplomb, matching those of Spider-Man 2 thrill for thrill. Smart cinematography and dazzling visual effects put us right where the action is. I honestly pity the viewer who didn’t catch this film in theaters. The web-slinging was a sight to behold on the big screen.

Composer James Horner, renowned for his work on Braveheart and Titanic,  does a bang-up job with the score here. It’s grand, sweeping, and muscular, yet personal, too. I admire Danny Elfman’s original Spider-Man theme, but all things considered, Horner’s work takes the cake.

I’m not saying this is a perfect film, because it’s not. But I do love it, warts and all. It’s a well-crafted superhero film, able to stand alongside the best of ’em. My recommendation: buy it, watch it, and re-watch it. I guess it figures that a guy named Webb would be responsible for the best Spider-Man movie yet.