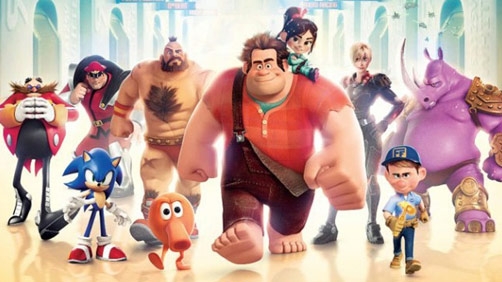 You may not have realized yet what family film Disney had in store for us this holiday season. What with so many sequels released in recent years from their animation studios, it’s easy to overlook the occasional original story they might release. It only occurred to me the other day as I watched the trailers before a showing of Wreck-it Ralph that this is their holiday theatrical release.

With a budget to the tune of $165,000,000 (estimated) it’s more than surprisingly delightful. This first film — in an undoubtedly new movie franchise — has been well-received. It is sure to attract large audiences through the rest of the year. Rotten Tomatoes sums it up:

Equally entertaining for both kids and parents old enough to catch the references, Wreck-It Ralph is a clever, colorful adventure built on familiar themes and joyful nostalgia.

Wreck-It Ralph is a 2012 3D computer-animated comedy film produced by Walt Disney Animation Studios and distributed by Walt Disney Pictures. It is the 52nd animated feature in the Walt Disney Animated Classics series. The film was directed by Rich Moore, who is known for directing many episodes of The Simpsons and Futurama. The script was written by Jennifer Lee and Phil Johnston. Disney Chief Creative Officer John Lasseter served as the executive producer. The film features the voices of John C. Reilly, Sarah Silverman, Jack McBrayer, and Jane Lynch.

The film tells the story of the titular arcade game villain who rebels against his role as a villain and dreams of becoming a hero. He travels between games in the arcade, and ultimately must eliminate a dire threat that could affect the entire arcade, and one that Ralph may have inadvertently started.

Wreck-It Ralph had its world premiere on October 29, 2012, and was released on November 2, 2012 in the United States and Canada.

Rated E for Everyone

On the surface, Wreck-it Ralph looks like a wacky kids cartoon. That’s exactly what it is, and it is so much more. Quite to my delight, Wreck-it Ralph transcends the targets audience with plenty to engage parents, teens, and fans of video game culture. I dare say that at times you would think this film was produced by Pixar.

John Lasseter who made his claim to fame directing Toy Story and Cars is now the executive creative director at Disney (remember that Pixar was bought by Disney in 2006). With a lot of hybridizing of Disney and Pixar creative talents, some onlookers have theorized the studios have swapped souls. The first tip off was the less-than-compelling Cars 2. Pixar now produces other lackluster disappointments, like this past summer’s Brave. If you thought this was only an unfounded theory after that film, you might be convinced that the theory is proven factual with Wreck-if Ralph. This movie is something characteristic of Monsters, Inc., The Incredibles, and Cars. It’s going to connect with a lot of the audience besides the children.

There are such a diverse collection of characters in Ralph from a variety of sensational video games. Much like the endearing toys in Andy’s toybox from Toy Story, there is something about each character you are bound to enjoy.

This movie is also for video gamers that simply revel in the medium for what it is and where it has come from. Being one of these people myself, I found it enriched the comedy to understand the undercurrent of the inside video gaming jokes.

In the spirit of Pixar’s creative and original worlds, Wreck-it Ralph introduces us to fun-lovable characters and other imaginary places. I think the story must have been inspired by a mashup of Tron: Legacy, Disney’s cartoon classic Alice in Wonderland, Monsters, Inc., The Incredible Hulk [1], and Nintendo classic games like Super Mario All-Stars and Super Mario Kart.

Wreck-it Ralph would have worked if the characters and games introduced were all original to the movie, but it was very charming (in a nostalgic sort of way) to see real-world video game characters interwoven. Honorable arcade characters such as Pac-man, Mario, Street Fighter’s Ryu, and others are in the movie. Video gaming heritage was paid a worthy tribute.

On another positive note, Ralph is one of the most curiously relatable characters I’ve seen in recent years. The film took me back to my experience with Monsters, Inc., a comedy that tugs on the heartstrings in unlikely ways. Vanellope is this little girl, like Boo, who encourages you to make a positive difference in children’s lives. Like Ralph, I came to care about the wellbeing of Vanellope like a surrogate father.

What’s Fix-it Felix Jr. to do?

The heart-warming care-free comedy Wreck-it Ralph is not a perfect film, I’ll grant you. It’s bound to turn some people off with the non-stop zaniness and rollercoaster-like pace. For a moment, let’s consider what Felix, Jr. could fix about this film with his magical hammer.

The villainous King Candy, a Mad Hatter if Disney ever made one, is something of an annoyance every given breath he takes. In the game of Sugar Rush where Vanellope races other kids in a game akin to Candyland, King Candy is the awkward, silly, goofy oversear that just comes across as inferior to the rest of the cool video game characters.

[Spoilers in this paragraph] Another thing I didn’t get excited about was the final conflict. Without giving anything away, the most difficult struggle for our protagonists is elaborate and outrageous, like you might expect from a video game. But taking a cue from less than successful films like Lost in Space, the villainous King Candy is merged with the body of a cy-bug [2]. He’s this bug/Hatter monstrosity (The Fly sort) that’s distasteful and sensational beyond the breaking point. Come the ultimate showdown, the struggle with this villain wanes. I quickly lost interest in the climax. By the time the heroes finish some daring feats to beat the cy-bugs, I was just hoping for the story to get back on track with the humor and more interesting character developments.

[Spoilers in this paragraph] My last complaint pertains to something near the end. Vanellope is a sweet, unpredictable, thrill-seeking bundle of a girl. At the last moment, when all of her game Sugar Rush is rebooted to the game’s proper settings, she is restored to her rightful title as princess over the land-of-candy race games. Oddly, Vanellope right then and there proclaims that she rescinds her royalty status and dubs herself “president.” As a political twist from an unpolitical character, this seemed unnecessary and distracting to an otherwise fanciful unpolitical movie. It was the one thing in the entire film that was completely unnecessary.

There is hope for Disney yet. I wasn’t hopeful when they bought Pixar. I figure it’s a wimpy move — buy the best animation studio in the world to crank out quality entertainment for you. That may be what Wreck-it Ralph represents, but since 2006 I’ve grown accustomed to their unholy alliance, and I think that we wouldn’t have had Ralph if it were not for their alliance.

Wreck-it Ralph is pleasantly more entertaining than I had hoped for. Kids will love it, and many adults that grew up with video games and enjoyed a frequent trip to the arcades. I think many people that could care less about video games will appreciate the morals to the story.

At the same time, Ralph is not the likes of the best Pixar films. There’s too much inspiration from Alice in Wonderland and time spent in a world like Candyland for my tastes. The climax is very elaborate and somewhat unninteresting.

But go see this film if you are straddling the fence. You are bound to enjoy this Disney year’s end entertainment extravaganza. It is well-worth the four stars I grant it. [3]