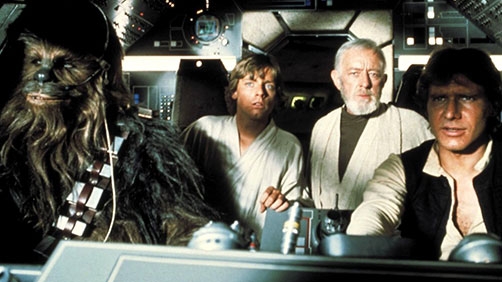 Although no one outside of Lucas and Disney executives know the content of the planned movie sequels, the first of which would come out in 2015, they will more than likely be original tales.

That means Zahn’s books won’t be directly adapted, but the author says that was always the case: “The books were always just the books.”

But years ago, he was briefed on Lucas’ plans for sequels, and how the Thrawn books would fit in. “The original idea as I understood it— and Lucas changes his mind off and on, so it may not be what he’s thinking right now – but it was going to be three generations. You’d have the original trilogy, then go back to Luke’s father and find out what happened to him [in the prequels], and if there was another 7th, 8th, or 9th film, it would be Luke’s children. The Thrawn Trilogy really would have fit into the gap,” the author said.

However, his books remain so popular they could still have a Force-like pull on the movies.

In many ways, they already have.

“I’d like to see the original characters in perhaps smaller roles, handing the mantle of adventure to the next generation. Luke would be like Obi-Wan, but not quite the same because he will have raised his children and Obi-Wan was more standing off, watching and protecting,” Zahn says.

That’s my vote as well. I’m not a huge fan of the books, though my wife tells me that Zahn is the best and most of the other books and authors aren’t really worth reading. But from a practical and story telling stand point, moving 30 years or so into the future from Return of the Jedi would allow a few of the actors to return to their roles at their current ages to pass the mantle and could provide a nice tie in.