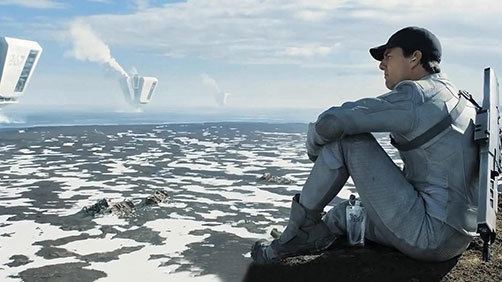 Another weekend has passed, films have been watched, box office reports are in, totals have been tallied. Let’s see what story they tell.

Winning the top spot on it’s first weekend outing, Oblivion slides in to home plate with a weekend domestic gross of $38.1 Million. That may be decent, but it’s not knocking your socks off for a $120 Million budget, however foreign charts or through the roof pushing the worldwide total to $150.1 Million. That already pushes the film above it’s production budget, and that’s a major win. This is apparently one of Cruise’s better openings in North America though. It should also be noted that while one of Cruise’s other films, Mission Impossible: Ghost Protocol was a little anemic when it opened to the tune of $29.6 Million, it went on to be a box office crusher to the tune of almost $700 Million worldwide. Oblivion is already doing better than that. And frankly, it looks like Oblivion has one more uncontested weekend as I don’t see anything opening this coming weekend that might displace the film. Obviously, in two weeks, Iron Man 3 will certainly displace it, but until then I expect this film to be on top for another weekend.

It was a really good solid film and I liked it a lot. Be sure to tune in to The MovieByte Podcast this Wednesday at 6:00 PM Central to hear Joe’s and my thoughts.

Another great film has taken the second spot on the chart for it’s second week out. It has only earned $18 Million this weekend, but that’s just not bad for a dramatic film lacking in action. Most general movie goers want more whiz-bang and don’t care as much about drama and story as I do. Still, the film is a winner with a $54 Million gross so far on a $40 Million budget. It has not where to go but up from here. I’m hoping it will have one more good solid weekend. It’s a good alternative for the anti-sci-fi anti-oblivion anti-action movie goers. And it’s a great film.

Obviously a huge massive win. I still haven’t seen it, it’s hard to find time, but I want to at this point.

I weep for the human race.

While I didn’t like this film all that much, at least I understand why it’s doing so well and at least it does not leave me weeping for mankind.

#6 The Place Beyond the Pines

I know literally nothing about this film. Should I?

Not terrible for week number five given what’s in the top three spots. I liked the film and wished it had done a little better, but we’re good and over the production budget so that’s good.

If you want to dive further into the breakdown, head on over to Box Office Mojo.