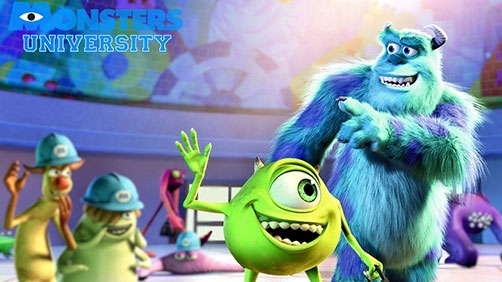 Some Pixar fans have noticed that the set-up of Monsters University is inconsistant with the backstory presented in Monsters Inc.. How could Mike Wazowski and James P. “Sulley” Sullivan have met for the first time in college when there is a line in Monsters Inc about the duo knowing each other in the fourth grade?

And it was really Pete Doctor, the original director, and John Lasseter who finally kind of said to me, it’s great that you’re honoring that, but you have to do what’s right for the story. You have to do what’s right for both stories in the long run. And  so we made a tough decision to just have them be in college and put that line aside. So the good thing is the only reason that line was in the first film was to just give you the feeling that these guys have known each other a long time and I think that college still does that.

So, they thought about it and they are ignoring it for the sake of the story they wanted to tell. In my opinion it doesn’t seem like it would be that hard to honor the story, but at the same time, I don’t think that’s going to make or break the film, and as much as I love Pixar and Monsters Inc., it’s still just a cartoon. I’m already over it.