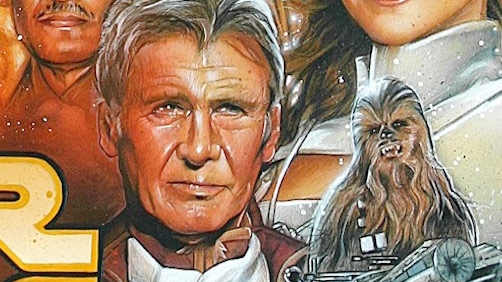 Yes, jump forward in time to when J.J. Abrams and Disney release their next Star Wars motion picture. What do you think the posters will look like? Bringing back the old cast — and likely introducing new faces to the Star Wars saga — this film’s posters promise to… show off elderly Luke Skywalker, Leia Organa, Han Solo, and Lando Calrissian. Mm. Are we ready for this? Are you ready to see your childhood heroes as you have never imagined them before? A very talented illustrator, Adam Schickling, follows in the design style of previous Star Wars movie posters designed by Drew Struzan. Adam delivers to our galaxy this rendition of the Star Wars characters for Episode VII. Adam put four weeks of work into this. His style uncannily resembles that of Drew. It’s one of the finer fan posters I’ve ever seen. Adam reports:

With that said, I got to comment of the aged group themselves. As this post illustrates, no amount of makeup-like mastery can hide the fact Mark Hammil is starting to resemble Emperor Palpatine. And Carrie Fisher is completely unrecognizable. And why is it that Chewbacca hasn’t aged a day? Chewy should have streaks of silver hair.

Luke and the Rebels should have used the force a little bit more, like 57-year-old Mace Windu.