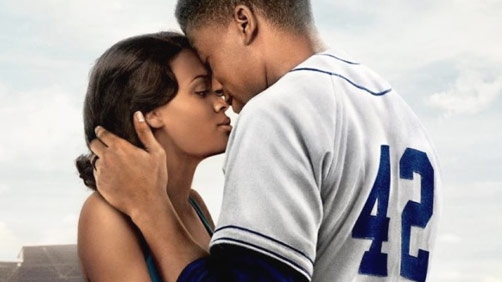 A team of amateur organized baseball players stop at a gas station for a fill-up. Jackie Robinson (played by Chadwick Boseman), one of the African American ball players, is refused entry to the washroom. The team says they’ll find another gas station so the attendant allows Jackie to use it to keep their business.

As Robinson comes out of the washroom, a baseball scout for the Dodgers approaches him and asks Robinson to join him for a trip to Brooklyn.

Branch Rickey (played by Harrison Ford), the general/executive manager for the Brooklyn Dodgers, is looking for a new first baseman. Naturally, he wants to pick from the best prospects in all of organized baseball. The problem is this is 1946, and African-Americans are not considered for the MLB — this had been an unwritten rule since the 1880s. Racism reigns in the professional ballgame, yet Rickey throws all caution to the wind and drafts Jackie Robinson.

Breaking the color barrier has it’s costs. Rickey gives Jackie strict guidance to “turn the other cheek” when confronted by racist ball players and ignorant fans. The young, quick-tempered, yet mature Jackie Robinson accepts his extraordinary responsibility: to turn the focus away from hatred back to good sportsmanship.

Ready to start playing and living in full swing, Robinson proposes to his girlfriend, Rachel, by phone. She accepts, and in short, they travel to Montreal for Jackie’s spring training as newlyweds.

During Dodgers spring training, Robinson successfully makes it to the franchise farm team in Montreal. After a great season there and more spring training in Panama, he advances to the Dodgers. This is when Jackie is first confronted by ignorant hatred within the Dodgers.

Most of the Dodgers’ ballplayers soon sign a petition stating they refuse to play with Robinson. Like it couldn’t get any worse, the Dodger’s Coach, Durocher, is suspended for an affair with a married actress. The Dodgers are leaderless.

This is the stage for Jackie’s greatest tests to come: when his fellow ball players will persecute him verbally every way they can on the field. Spectators will do anything to rattle Robinson and get a violent reaction out of him.

Can the Dodgers, baseball managers, and the Robinsons endure? How can they endure? 42 explores this and other challenges the honorable few in baseball hall of fame were challenged with in 1947.

Baseball films easily afford illustrations of American pastimes and biographical sketches. 42 is humanized with a wide array of character performances. Even Harrison Ford acts like a character actor, like Alan Tudyk. The people portrayed are fleshed out as everyday folks: offering drama, moments of authentic humor, and drop-dead serious conflicts we know all too well.

This is how we can enjoy 42 to the fullest. The film isn’t designed to impress audiences with sensational depictions of history, like Lincoln by Steven Spielberg does. 42 is accessible for “We the People” looking for hope in the face of our real-world struggles. Though the manner which these struggles appear in the film are dated, they are no less relatable.

There is more than one American hero in 42. Pee Wee Reese (played by Lucas Black), Branch Rickey, Rachel Robinson (played by Nicole Beharie) among others with Jackie are people struggling and succeeding to do what is best for baseball and their fellow man.

All things considered, 42 has more to do with the times and circumstances in Major League Baseball than Jackie Robinson himself. The movie isn’t “the insightful exposé on Jackie Robinson.” It’s an illustrated history lesson of Jackie and the others that turned the tide for racial equality in the game during the late 40s.

Not to belabor Lincoln, but after Steven Spielberg’s Lincoln I didn’t have high hopes for 42. Historical films often rot under the pressure to make them sensational as to appear epic. Lincoln did this. The impression viewing that film is that the actors believed what they were portraying was monumental. Their acting screamed “what I’m personifying is oh-so grand!” This is pretentiousness, people. It’s a common failure of Hollywood and independent films alike portraying historical events.

This wasn’t a shortcoming for 42. Rather than amp up the grandiose nature of baseball, the theme of equality, and the like, the characters tell the story like everyday folks living their lives. The actors don’t have the self-awareness or angst on screen of Lincoln’s characters. I commend Brian Helgeland for striking the right balance whenever he could manage his actors (which was most of the film). This story needed a good film to illustrate its times and the challenges America faced. The racial inequality in America was beginning to topple, but no one knew that in 1946-1947. If you think the morality problems we are faced with today are new, then this film will show you where we came from. Men like Jackie and Rickey were key to turning American racisim around. As Richard Roeper put it:

The sliding moral scale of major league baseball at the time was such that Brooklyn Dodgers manager Lei Durocher was suspended for an entire season for having an affair with a married actress — but Chapman was just told to knock it off with the racist taunts and to pose for a publicity photo with Robinson.

Jackie Robinson was an extraordinary man. He was mature beyond his years, withstood social tensions no man should have to endure. And on the other side of his baseball career, he made it possible for more Americans to love and respect one another.

This isn’t what baseball players are known for, and that’s why this history lesson is so representative of America’s greatness — and sinfulness — during the 20th century.

It’s Not All Black and White

42 is practically a perfect film in the formulaic sense. It’s an audience pleaser. The events are handled with lots of care and precision to entertain as well as inform.

It’s a little overly edited, to the point of appearing sloppy at times. Harrison Ford as Branch Rickey is a bit too good and over-the-top. On another note, we don’t get to see the inner struggle Jackie experienced as much as his saintly exterior. Some are disappointed with these characteristics of 42.

But the one thing that I honestly dislike is that the movie left me hanging — wondering how it would go for the rest of Jackie’s ball career. 1 42 is just a scrapbook of the most well-known moments in baseball business and Jackie Robinson history. The ending, though heartwarming, had little to do with the conflict or Jackie’s character arch.

While this is my one real criticism for 42’s film craft, I weigh this criticism with the good screenplay, which doesn’t overly dramatize the events. Adding to the story with superfluous drama and tension that wasn’t historical would have diluted the film’s intrinsic value. 42 is faithful to the years it covers at the expense of building up a fantastic climax where Jackie defeats racism, or something else spectacular. The film sticks to what we know from the bleachers and history books.

42 is an altogether light-hearted look at old-fashioned American racism in baseball culture, and how some smart men and women overcame persecution. The story of Robinson is highly respected and well-represented in 42. It may not be an in-depth view of his life and the times, but it’s an entertaining one, eye-opening, and deeply moving.