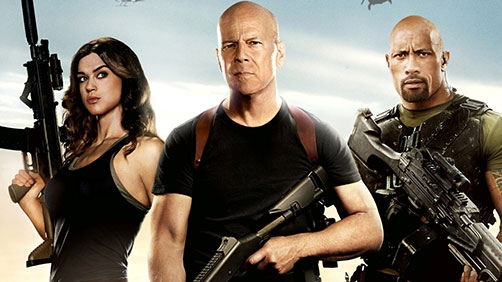 Do you remember how fun G.I. Joe: The Rise of the Cobra was? I mean despite the fact that it was a little light on plot and a little heavy on action, it really was a fun film. Had I been reviewing and rating films in 2009 I think I would have given that film about 3.5 stars.

Unfortunately I must inform you that this film comes nowhere close to that. This film is unfortunately very much like the video game Dwayne Johnson and Channing Tatum were playing in one of the very early scenes of the film.

With almost little or no fanfare, very early in the film, one of the primary characters from the previous film is killed off and we are left with a group of characters we did not know or meet in the previous film. So much for continuity. What in the world?

Is There a Plot Here?

Yes, there is. And it feels like the plot my eight year old self would have come up with while playing with my… well I didn’t have many G.I. Joes, but my other various action figures, toys, and LEGO blocks — which is to say, a wee bit overcomplicated and a lot silly.

First there’s the president (Jonathan Pryce), but he’s a fake president. He’s the evil guy, he’s bad. And apparently, even though he has all this power and can do pretty much anything he wants, his goal is to free the Cobra commander. He calls a strike on the Joes, four of them survive. They come to D.C., figure out the president is a fake, enlist the help of General Joe Colton (Bruce Willis), head to the nuclear weapon summit where evil fake president is sending America’s nukes after everyone, then calling them off, then letting Cobra commander come in threaten, then begin dropping a new weapon on various countries around the world. The Joes come in, save the day, and the cobra commander escapes. Did I miss anything?

Yeah, it’s as bad as it sounds. If there was ever a case of “go home and do it again” this is it. I mean it’s simply awful. It’s like something straight out of a bad ‘80s cartoon.

At any given point in the film, what plot there was felt mechanical, like they were going through the motions because they had to. There was no sincerity, no heart, no creativity in any part of this film. Guns and explosions are the name of the game here.

Bruce Willis is 0 for 2 This Year

First, there was A Good Day to Die Hard, and now this. What has gone wrong in Bruce Willis’ career? This is bad. No, I mean it. This is not a good batting average. Not only is he choosing to be in the wrong films, but he’s not putting his heart into the rolls at all. He had very little screen time, and when he was on screen he didn’t do much and his presence was not really felt. What is up with that guy?

This one is a dud guys, don’t bother wasting your money on it.