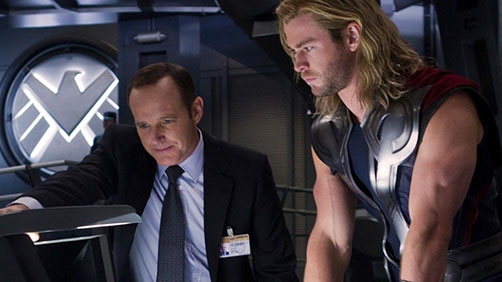 In the pilot, it’s revealed Nick Fury (Samuel L. Jackson), the ultimate super spy, faked Agent Coulson’s death on purpose to motivate The Avengers. Some S.H.I.E.L.D. members were in on it (including, possibly, Maria Hill played by Cobie Smulders) but The Avengers were not. Their security clearance wasn’t high enough. Coulson was forced to hold his breath as part of the ruse and that’s a point of contention among his colleagues  After the fact, Fury moved him to a remote location until things died down, and then he was reinserted into duty at the time of the show.

At this moment, several things are unclear about this explanation. First, it’s unclear how Loki piercing him with the scepter didn’t kill him. Also, it’s unclear if Coulson’s return to S.H.I.E.L.D. will be a reveal in the rest of Phase Two or exactly why he was reinstated. What is clear is this plot point is part of a larger story, with more details to be revealed in the show itself.

If that’s all accurate, I’m a little bit disappointed. I won’t let it spoil things for me, but it does sort of lessen the impact of Coulson’s death. Of course, Fury already did that with the “cards” Coulson had in his “pocket” and it fits with Fury’s idea that the Avengers needed a little push to save the world.

I don’t know, what do you guys think?