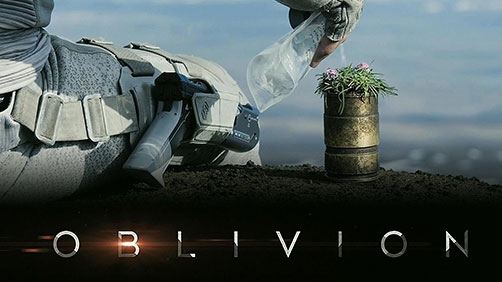 Following up on the major box office success that is TRON: Legacy, director Joseph Kosinski has placed himself squarely back at the forefront of the sci-fi genre in a big way, with a fairly big star: Tom Cruise.

Cruise may not be the most versatile actor, but when he works in a role, he works very well. My favorite role for Cruise to date may well be Minority Report. Tom Cruise is essentially playing the same part in all the films he’s good in. So the question is/was, is he cast right in this role?

I can give a resounding yes to that question. For whatever reason, Cruise works very well when cast in the sci-fi/action/thriller rolls, and here he does not disappoint. He tends to bring a bit of that school-boy wonder mixed with skepticism, curiosity, and “couldn’t give a care” attitude — a sort of earnestness that can make one a little queasy in films like Top Gun, or can make him really likable in films such as A Few Good Men, or as in this film.

And there is also Andrea Riseborough as Victoria (Vic or Vica usually in the film). I have never seen her before but she did a stand out job as well. Particularly she was a conflicted character that wanted to do what she thought was right, and you want to like her, but she makes some poor decisions. It’s a hard role to get right and she did well.

Obviously, Morgan Freeman was great as always, but I felt he was particularly used well here as opposed to the last film I saw him in — Olympus Has Fallen in which I felt he was severely under-utilized. But Kosinski did make particularly good effect of the possible menace he represented to Jack Harper, and made great use of that voice!

And there is also Olga Kurylenko, unknown to me until seeing her in Quantum of Solace. One could surmise that she was cast for her beauty (because what good sci-fi doesn’t have some beautiful women in it?) but, while she was not exceptional here or anything, she did do well in communicating her role and the emotions her character was feeling, such as when she saw Jack Harper, but couldn’t tell him who she was, and wasn’t even sure who he was, etc.

So what’s going on here in terms of plot? Well, the year is 2077. Jack Harper’s voice over tells us that sixty years prior earth was attacked by aliens, there was a war, the moon was destroyed and that obviously resulted in massive tectonic chaos, and he and Vic are the only two humans left manning a maintenance facility. He is Technician #49, and there is a massive space station called the TET that supervises their operations from orbit. The rest of the humans live on Titan and resources are scarce, which is why earth is still manned by the small maintenance crew and a few drones — to mine the remaining resources and use earth’s oceans to make power.

But, when a ship breaks orbit and crash lands, Jack’s world comes crumbling down around him. All the things he thought he knew are not actually true.

There’s nothing that’s especially unusual or spectacular about the plot, but it is quite compelling. Granted those who do not enjoy the sci-fi/thriller genre are probably not going to like this film and that is their loss. By the time this film is over and the major plot twists have been revealed, and even though at the climax you know how it’s going to end, the fact that you know doesn’t matter. I found myself quite emotionally compelled by a great story, regardless of the genre. Kosinski snuck up on me. I did not ever realize that I was emotionally invested in Jack Harper’s life and plight, but I was. And at the end is when I felt it.

A film is nothing without it’s plot and characters and no amount of special effects can make up for that. Thankfully, with those in place, the effects here do nothing but enhance the story telling and simply elevate the film to the next level.

Obviously there’s going to be a metric butt ton of CGI in a modern sci-fi film like this, but I was pleasantly surprised when I began to learn early on during the promotional campaign that Kosinski was doing as much practical and in camera effects as possible. This even included an expensive trip to Earl’s Peak to do some filming rather than putting the actor(s) on a mountain top digitally. The results are a much more realistic feel to the film. The characters are actually acting and reacting to real things going on whenever possible. The backdrop of the clouds and sky through the windows of the tower for instance, that’s all back projected onto the real set. No green or blue screen, therefore the actors are in a much more real feeling environment, there’s no green or blue spill, and everything feels just a bit more real.

Of course as I said, there’s plenty of great CGI to feast your eyes upon. Computer animation is advancing to the point where it is very difficult to tell what’s real and what isn’t anymore. The exception to this is animated humans, but as far as I know, there were none of those in this film, and it looked really good.

One of the things I particularly enjoyed about the first Kosinski film I saw, TRON: Legacy, was the score. Kosinski tapped Daft Punk and teamed them with Hans Zimmer, and the result was pure awesomeness.

Continuing in that vein, Kosinski pulled in the band M83, which I had never heard of before, along with composer Joseph Trapanese, who has done work connected with the TRON universe, to score this film. The result is something pretty spectacular. Yes I know a good film score is often considered one that you don’t notice or think too much about, and I think that in a general way that is true, but there is also nothing wrong with a score that draws attention because it is so good. I don’t know if it quite comes up to the level of the TRON: Legacy score, but it is quite good. It hits the right emotional notes and has the right tone all throughout the film, and as with TRON it is a great pairing of orchestral and cinematic scoring, with the necessary tech feel. It feels big and sweeping when need, it sounds menacing when necessary, and it is soft and touching at other times — everything you would expect from a good film score.

The film is not without it’s flaws of course. I did not rate it five stars so there are a couple things that merit my scrutiny.

Though the script starts out strong in my opinion, it gets a little weak as the film goes on and by the end, there’s just a hint of, “is that it, is that all there is?” I wanted the climax to be a bit more epic, I wanted there to be a little more meaning somehow, I wanted to know a little more about the villain. In fact I would say it worked well right up until the reveal of what was inside the spacecraft, then it simply worked okay and could have been a lot better, a lot more epic, a lot more menacing.

And my other complaint is that getting cruise into the “enemy’s camp” to set off the weapon and destroy it was a little thin. Are they seriously trying to say that that high tech alien thingamajigger could not detect who and what was with Jack? It was a little lame.

With that little bit of dislike out of the way, I did enjoy this film immensely. It has a lot to recommend it, it has a pretty great story, great visuals, and it’s very moving. As many good films do, it has a tendency to sneak up and grab you and engage you emotionally. And for all that I recommend it. It’s a good one to see in theaters.