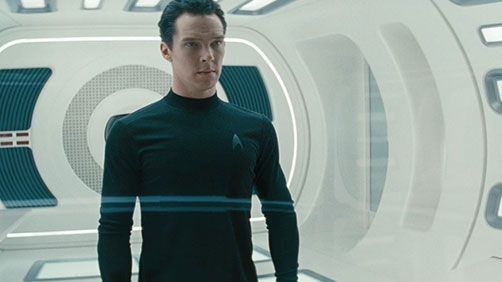 First of all, another clip, this one showing of a confrontation between Chris Pine’s Kirk, and Benedict Cumberbatch’s John Harrison.

Harrison appears to be in the brig of the U.S.S. Enterprise, and if I were to guess, he’s using psychology and manipulation on Kirk. Somehow I just don’t believe a word he’s saying. Of course, it’s always possible that Cumberbatch isn’t the villain at all and that we’ve been mislead this whole time, but I do doubt that at this point.

You should know three things before we go on:

Here we go guys, this is possible spoiler territory. You have been warned.

So now that we’ve all watch this officially released clip, what does it mean? Anyone who wants answers can go watch the first ten minutes of the original series episode Space Seed. John Harrison in this clip tells Kirk he has 72 reasons for Kirk to do something. 72 is the number of Botany Bay crew members that survived in Space Seed. Whatever happens, whatever the truth is, this is not a coincidence.

Now, this number may have been put in this clip specifically so it could be released as a clip and deceive us and keep fueling speculation… OR the Botany Bay, and by extension Khan will be making an appearance. Khan may or may not be John Harrison if that is the case.

This is all the more fueled by the fact that in many of the trailers we have seen shots of what may well be cryo tubes. Hmmm.

Additionally, John Harrison says in the clip, “Are you going to punch me again over, and over, and over until your arm weakens?” The “again” part indicates Kirk has already tried this and yet Harrison bears no bruises or marks of any kind. Seems like that may be because he’s the super human Khan.

But again this could all just be misleading breadcrumbs.

Here is the thing. I know I have mentioned before, and I said on the podcast I would be slightly disappointed if this villain was Khan, but I think I have changed my mind. I have at least reconciled myself with the fact that Khan may appear and I think I am okay with that. You see, we actually haven’t seen that much of Khan in Star Trek. What we have seen of him, both times, has been memorable, but he really was only in a 1 hour (45 minute) TV show episode, and a 2ish hour film (of which he didn’t even have half of the actual screen time). How much of Khan have we really seen and could not a fresh story in this reorganized universe be just fine?

And additionally, we aren’t all jumping up and down going, I can’t believe we’re rehashing Captain Kirk, we’ve seen all he has to offer before. So, a fresh take on Khan might not be such a bad thing.

That said, I do still think a villain other than Khan might be slightly better, but unless they do a complete retread of Space Seed, or Star Trek II, I think I will be okay with if if Khan is in this film.