Sucking the Life Out of ‘Oblivion’

The following may be considered offensive and contains some things that you might call spoilers.
We leave it up to your personal discretion to decide whether an article is appropriate for your reading. 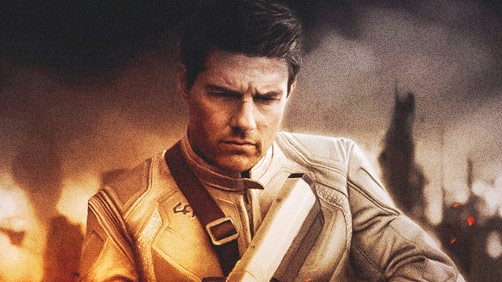 This morning I read one of those movie reviews that gives me an upset stomach; a review so pathetically ridiculous that it warrants criticism for its misleading tropes and arrogant close-mindedness.

If nothing else, “Oblivion” will go down in film history as the movie where Tom Cruise pilots a white, sperm-shaped craft into a giant space uterus. The scene is more interesting to describe than it is to watch. Cruise’s sperm-ship enters through an airlock that resembles a geometrized vulva. He arrives inside a massive chamber lined with egg-like glass bubbles. At the center of the chamber is a pulsating, sentient triangle that is also supposed to be some kind of mother figure. Cruise must destroy the mother triangle and her space uterus in order to save the Earth.

Clearly Oblivion depicts these metaphors — so much so that the tangibles are without likeness apart from female anatomy [sarcasm]. Well, some call me Metaphor-man [true], yet these metaphors completely slipped passed me. It’s writers like Ignatiy that give metaphors a bad wrap.

Harper lives in a penthouse-like tower with his communications officer, Vica (Andrea Riseborough). Vica’s eyes are permanently dilated. Like Olivia Wilde’s Quorra in “TRON: Legacy,” she often resembles a marionette.

It was by this statement, not half way through Ignatiy’s review, I realized he didn’t have anything worth saying about Oblivion. Rather, he’d write something that seemed smart/intellectual. I picture Ignatiy writing at his desk looking like Donkey Kong wearing a red neck tie. Metaphorically speaking, of course.

And, really, I didn’t see wooden joints, strings hanging from the ceilings, or a goofy grin painted on the lead females’ faces in either Oblivion or TRON: Legacy. Ignatiy has an overactive imagination. He sees what he wants to.

The astronaut has been in cryogenic sleep for the past six decades but refuses to disclose the nature of her mission to Harper and Vica until they recover her flight recorder. It goes without saying that the flight recorder unearths all kinds of secrets about Harper, Vica, and the alien invasion. It also creates one of the movie’s more glaring logical errors, but that’s a different story altogether.

This is his one “like” in his whole review. So, he can’t even mention the one thing he thought mildly worked without criticizing the film some more. In a 706 word review this was his only positive remark. Yet Ignatiy gives Oblivion 2 out of 4 stars. Clearly, he wasn’t reviewing the movie he saw because he liked the movie more than his review does.

As the first commenter on the review, Louis Corsiglia, put it:

Obviously the reviewer is more interested in his own ego and his taking joy in ruining the movie than he is in attempting to provide a decent review.

I did not like his work in the last roger ebert movie review show and I am probably not going to like it here.

This is one example of why I dislike movie critics: they often write about movies like they hate the very idea of entertainment. Ignatiy must love to hate movies, or something.