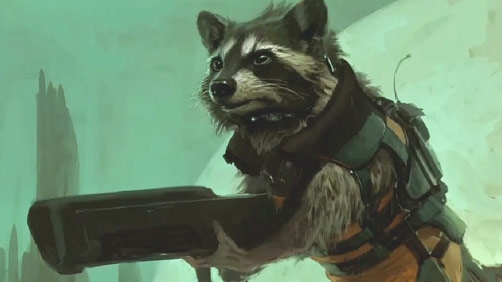 If you aren’t in the loop, here is where you can catch up on all the upcoming Marvel movies. “Phase Two” as the studio is calling it, continues the adventures of the quintessential Avengers and introduces new super-heroes to cinemas, like Ant-man, and this suspicious-looking, gun-carrying raccoon. If my guess is right, the animal is a character in Guardians of the Galaxy, and I haven’t the faintest idea what that story is about besides what it implies.

Ant-Man comes to theaters November 6th, 2015. The film is directed by Edgar Wright.

Guardians of the Galaxy comes to theaters August 1st, 2014 and stars Chris Pratt, Dave Bautista. The film is directed by James Gunn.

Seriously, I want to know if the raccoon is a good idea. I don’t know if general audiences are ready for that. Can you take Iron Man and Captian America seriously if they are fighting along side of a super-raccoon?

Hm. Maybe it’s no different than having Thor — the god of thunder — as a super-hero.