For a matter of record, this review started out as Joseph’s review, but even though he rates it three stars, he was unable to figure out how to put his likes for the film into words. Consequently the review sounded much more negative than he intended. He gave me the go ahead to write the review instead and incorporate any of his that I wanted to. Joe published his original review on his site Jiving Jackalope. You can find it here. 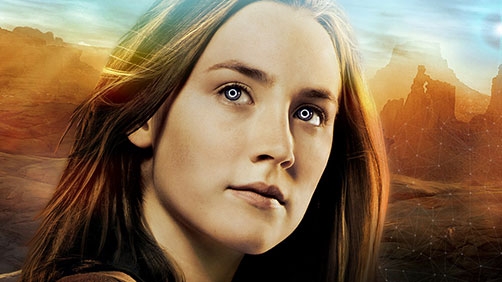 Stephanie Meyer has enjoyed an immense amount of success with the Twilight saga in both book form, and film form. But before writing the final book in the Twilight saga, she took a break and wrote The Host. I have not read the book (which I cannot say about the Twilight series), but my wife has and she says there is much to recommend it over the Twilight saga. But it still does have some flaws.

Joe read the novel and finds it to be better than Twilight novels as well. And I’m with Joe. Given what I know from the film, I would rather spend time in the universe of The Host. But such is not to be with only one novel having been written.

Aliens have invaded earth, infiltrated society, and taken over the bodies of most of the entire human race. Melanie is one of the few humans still living as a human. She, her boyfriend, Jared, and her brother, Jamie, are desperate to find rations and supplies before they flee from a city overrun by the alien body snatchers — aliens that call themselves “souls”.

To Melanie’s chagrin, she is caught and her body is taken over by one of the souls named Wanderer.

Wanderer is used to this sort of thing. She’s lived many lives over on other planets indwelling other creatures’ bodies. The human body, along with its incredible will to create culture and express emotions, enraptures Wanderer. She is deeply moved by the human way of life, and she is excited to live a new lifetime in her host, Melanie.

But Melanie’s heart and mind are very active. She fights Wanderer for control of their body’s actions. Wanda, as Wanderer is eventually nicknamed, slowly but surely sees Melanie’s point of view. She comes to grips with the horrors caused to the human race her alien souls have inflicted. Inevitably, Wanda wants to restore Melanie to the life she took from her. She also wants to shake The Seeker (villainess) soul that wants to eliminate the last pockets of human resistance.

None of this is easy for Wanda. By the time she wants to give Melanie her life back, she has come to love the people that Melanie lived with. Melanie’s brother, Jamie, might as well be Wanda’s brother. So what’s to be done with Wanda if she doesn’t have a human body to host?

From very first having heard the premise I thought it felt very much like that of the Goa’uld in Stargage SG-1, which in my book is not a bad thing. The concept is a great sci-fi concept (and the Goa’uld made awesome enemies). But unlike the premise of the Goa’uld, the premise here is that it is possible for humans and these aliens to co-exist. Maybe even peacefully.

But it seems that before the humans, ethics never really occurred to this race of “souls” — at least not ethics as we think of them, for there do seem to be some ethics in place. The “souls” would never dream of lying to each other apparently. And they believe in living in harmony with one another. Now, living in the same body with Melanie, Wanderer must come to grips with her morals and ethics as opposed to human morals and ethics. She must decide if what the “souls” are doing is wrong.

And there’s other cool science like stuff going on, like growing wheat in caves via mirrored sunlight.

There’s something to be said for a film going out on a high note, and this film almost manages to do that. It sagged a little during the middle, practically starving the audience for want of action or plot. But the end was emotional and powerful, and I only quibble slightly with the very end of the film. But it’s mostly a satisfying conclusion that made me wish there was more to come (sadly, I think mostly due to prejudice against Stephanie Meyer, this film has not made a lot of money and that is not promising for writing more novels and making more films in this franchise).

In the end, this film is about a character developing ethics and growing a conscience. And it is done so in an emotionally impactful way.

One of the flaws of this film which I will get to is also one of its greatest strengths. Saoirse Ronan does a superb job of playing both Melanie Stryder, and Wanderer. Her performance is actually nothing short of extraordinary. You can really believe that this body is shared by two people. And I appreciate that though there is some humor and comic situations going on here, the role is played very seriously. It’s easy to make the situation hokey and over-played, but Saoirse balanced the role out very well.

In fact, any weaknesses in her performance can be attributed to the script (which, I’ll be honest, needed a little help here and there).

There were other decent performances in this film, such as William Hurt’s Jeb. Diane Kruger was also good as The Seeker.

The acting and performances from the two love interests however were beyond poor, easily bringing my star rating for this film down by at least half a star. Sappy and poorly acted in addition to some bad scripting. Which brings me to…

As anyone who is familiar with the Twilight series will know, Stephanie Meyer likes the love triangle thing. But this novel / film has a bit of a different twist on it. And given that there are two people in one body, it’s more of a quadrangle than a triangle, which makes it a little easier to stomach. But only a little. Let me try to lay this out for you. Early in the story, Wanda is new to her human body, experiences, and the cultures within cultures within cultures that she has thrust upon her. Not only that, but she has Melanie in her head telling her what Melanie feels and thinks about all the issues and people in their lives. This confuses Wanda for the first half of the movie, making it difficult for her to choose her own opinions and emotions.

The movie simplifies the issues to help the audience find a way to relate to the girl(s). The movie tells it more like a simple love triangle. Wanda and Melanie are first after the same guy. Then, when Melanie isn’t willing to share him, Wanda goes after another guy. Then, when Melanie isn’t willing to share her body, she lashes out on Wanda and the guy Wanda likes. Meanwhile, the guys break out into macho cat fights. So there are two separate triangles in this case: Melanie/Jared/Wanda, and Jared/Melanie/Wanda/Ian. Its a movie mess of a good novel.

The Character Development Needed a Soul

The only character development going on in this film is Wanderer’s. No one else in this film learns anything or goes anywhere or develops different opinions or feelings of any kind other than what they started out with. That’s not good. That is very bad in fact. Everyone is sort of playing the same note over and over again except Wanderer. It makes the film a bit boring at times. As I said, the performance by Ronan, and the script surrounding her character’s development is great. But the rest of the characters? They were just there.

Can I Get Script Please? Any Script Will Do

And one of the things that really dragged this film down was the incessant whining and babbling of the boys and their cheesy love lines. In fact, much of the dialog in much of the film is mired down by amateur hour writing. It feels as if they shot the first draft of the script, frankly. Ronan may do an exceptional job of making her lines work, but often, it’s just hard to overcome a script that bad.

The exceptions to this are the dialog between Melanie and Wanderer. There are truly some delightful scenes and dialog between these two and the inherent tension as well as humor is simply delightful. I wish the rest of the film had dialog and writing more like that.

As with Twilight, I find the premise to be rock solid, and the execution to be somewhat lacking at times. But all in all, I prefer this universe and wish that there were more coming, and that it would be better executed. And somehow, the love stories are more palatable here than in Twilight — well, I mean, it’s not Bella pining over Edward’s “liquid topaz eyes” or whatever.

While I wish the film had been better executed, I still think this one is worth seeing if you like sci-fi, or Stephanie Meyer, or both.