Trailers Give Away the Movie 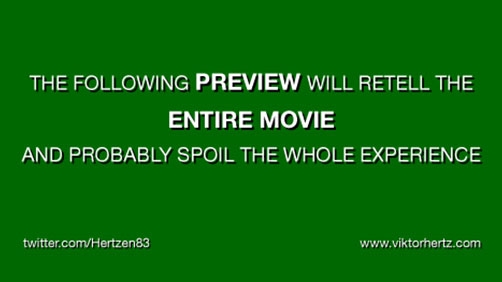 There is a swell new trailer for Man of Steel. Actually, it’s beyond swell; it’s epic. In fact, it’s so epic, if you removed a few of the fast cuts to give a bit more plot clarity, and then add in something about Superman conquering General Zod, then, well, you’d probably have the world’s most epic 3-minute film.

It reminds me of the 2002 Spider-man Trailer where just about the only part missing is Spider-man actually defeating the Green Goblin.

Shawn analyzing the state of movie trailers, and he’s not wrong. I’ve talked about it before with Joe on the podcast, but it is a bit of a problem. And especially for someone like me who watches all the trailers so I can have an opinion and post them here on the site. I think part of the problem is that the culture’s attention span has become so short that we have to give away more and more of the film to keep anyone interested.

it’s a tough nut to crack.