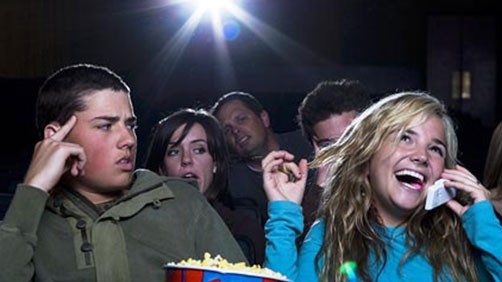 The lady seated to my immediate right (very close quarters on bench seating) was fairly insistent about using her phone. I asked her to turn it off. She answered: “So don’t look.” I asked her whether I had missed something during the very pointed announcements to please turn off your phones, perhaps a special exemption granted for her. She suggested that I should mind my own business.

So I minded my own business by utilizing my famously feline agility to deftly snatch the phone out of her hand and toss it across the room, where it would do no more damage. She slapped me and stormed away to seek managerial succor. Eventually, I was visited by a black-suited agent of order, who asked whether he might have a word.

This may be a live performance theater and not a movie theater, but rude people and phone usage is still something we all deal with in either type of theater.

No, the man should not have thrown her property, but the woman should also have been escorted out, and much sooner than that intermission. I’ve had enough people sitting next to me disrupting my movie experience with their phones, or by other means such as talking obnoxiously, that I understand exactly how he felt.

I have often wished that I could start and run a movie theater. I don’t know how well my ideas would work given that most people are rude and would not like their rudeness curbed. But for the people who would appreciate it like me, I would have a no-tolerance policy. It may be a bit disruptive for the first few days and weeks as you escort people out during the film who were talking loudly, or using their cell phones, but soon enough you would get a good reputation and people in my theater would either stop being disruptive, or stop coming.