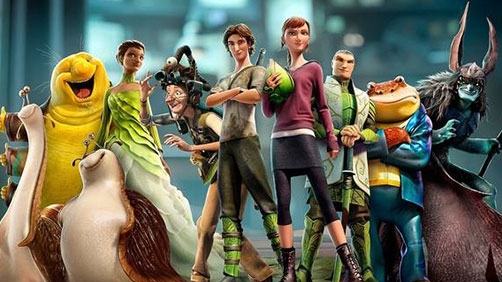 I’ll admit, I went into the theater to watch this film with low expectations. Maybe it’s the fact that the production company and guys behind the story were also behind the likes of Ice Age, Robots, Rio, and more. It did not instill confidence. And the trailers failed to inspire me. Couple those things with the entirely lackluster promotional campaign and one did not get the sense that this film would be any more than a bit of drivel peppered in amongst the big summer tent polls.

I was therefore exceedingly shocked to walk out of the theater at the end of the credits having thoroughly enjoyed myself. Epic may not quite live up to its name, but it was fun where it needed to be, it surprised where it needed to, and it had plot where it mattered. A Pixar film this one may not be, but does every computer animated film need to be like a Pixar film? In fact I would say the strength of this film is that it is not, nor does it try to be a Pixar film.

But even with that said, it is like a Pixar film in that it targets both young and old. There is something in it for everyone of every age, at least I think so. But it is an animated film with a fairly large focus on being a children’s fairytale and I would say that is the primary target audience.

So actually, the title Epic is having a bit of fun with the size of the characters methinks. Normally we would use the word Epic synonymously with big, as in a big deal. Our protagonists certainly aren’t big. In fact, they are quite tiny.

Essentially, Epic is a tale of the struggle between the forces of life and the forces of decay in one particularly forest as perceived and imagined in a fairytale world. That fairytale world involves little people more or less living on a different plane of existence. Some of those little people are actual people, the leaf men, the queen, some are normal animals, birds, rats, mice and the like, and some seem to be completely made up creatures.

Bomba is a (mad?) scientist convinced that these little people exist. He was apparently divorced because of his obsession. The details are a bit fuzzy because this is not really the focus of the story, but apparently his ex-wife has just passed away and his daughter Mary Katherine (M.K.) is coming to live with him.

She realizes just how crazy he is however and is on her way out of there when she is caught up in the “epic” battle going on in the small realm her father has been searching for. The queen of the little people, with her magic pulls M.K. into the small realm and she must join forces with the leaf men to protect the pod that will produce a new queen and keep the forces of decay at bay. It may seem run of the mill, or even sappy in the telling of it in black text on a white background, but let me assure you that this film is immensely enjoyable. Most enjoyable of all is this film does not beat you over the head with some agenda or environmental message. There are no allusions to what man might be doing to destroy the forest etc. etc. etc. We’ve certainly had plenty of that tripe from studios such as Disney, or filmmakers such as James Cameron. Thankfully this was not a rehash of the themes or story you will find in films like Ferngully. No, all we have here is a fun story in a fanciful world.

Along the way we meet fun characters such as Nim Galloo (perhaps my favorite secondary character), and we get fun concepts such as the rings of knowledge in the tree. I also loved the concept of these little characters living at an accelerated rate moving much too fast for humans to normally see. 1 Of course the idea of them riding hummingbirds was great too.

Another thing I greatly enjoyed about this film is the incredible attention to detail in the animation. It does not try to look like a live action film or anything like that. And yet at the same time, any time we see general shots of the woods or other things where living creatures are not involved or prominent in the frame, it looked unbelievably real — and beautiful. This is a very beautifully animated film with great attention paid to detail. Less on the beautiful side and more on the fun side, was the attention to detail in creating Bomba’s “office” which was quite wonderfully messy and strewn about.

We also get some beautifully animated scenes involving the queen crossing a pond on lilly pads, or in her arboretum tending her flowers.

Also of particular delight is the voice cast. Colin Farrell’s Ronin hit just the right notes of performance, brining gravity where needed and at times providing levity, which was also perfectly balanced in the script. Christoph Waltz’s Mandrake was also particularly fun. I love a good villain well overplayed, and this one was it. Beyoncé Knowles as Queen Tara was also a good choice, though her voice is a bit distinctive and hard to mistake, it worked for the part.

My only hesitance here is Amanda Seyfried as M.K. She was passable, but the voice was a teeny bit grating at times as I have found her voice to be before. And that could simply be just me. It didn’t detract from the film, but I might have preferred someone else.

But as with most films, not everything is perfect. One thing that particularly bothered me is that there was not a lot of character development. What very little bit there is here, is given to Mary Katherine who realizes that her dad was not wrong and now she needs to get back to him.

But otherwise the characters just are. The motivations are a tad bit flimsy, and it is not established why M.K. is not freaking the heck out at being shrunk instead of mostly just going along with it as she does.

As well, Mandrake’s motivations are not clearly defined either. He’s just a bad guy going around finding ways to be bad. There is a half hearted attempt to explain his evilness for about five seconds in the middle of the film but it doesn’t really work.

It also felt like the writers tried to set up character moments and development for Nod (Josh Hutcherson), and his mentor Ronin (Collin Farell), but it fell pretty flat and in the end I never felt like Nod learned anything or grew out of his annoying boyish arrogance.

Go and See It

Even with some of the negatives, this film is well worth seeing. I was ultimately blown away with how good it was. I enjoyed it so much. And it’s definitely a good one to see with your kids too. There is a bit of scariness with the bad guy, but nothing most kids can’t handle. For instance, I would not hesitate to take my 6 and 4 year old to see it. I might not take my 2 year old though.

I felt it was one of those films that had something to offer to both young and old, much like I often feel about Pixar films. And I enjoyed that there was not crass jokes or otherwise inappropriate humor, and there was no subtle implications that rebellion against parental authority is good, as we so often get from the likes of Disney.