Evangeline Lilly As a Hobbit 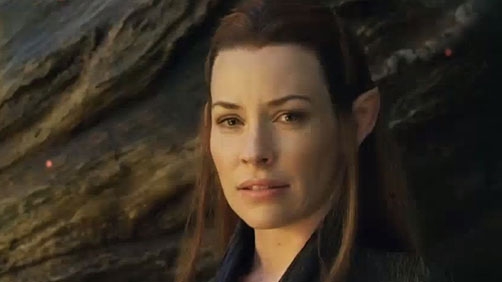 “She’s a very, very young elf,” Lilly said. “She’s only 600 years old, unlike Legolas (Orlando Bloom’s character), who’s like, 1,900 years old and Thranduil who’s about 3,000 years old. She doesn’t have quite the wisdom and pose that those two boys do; she’s a little more… gritty. A little more spontanteous, passionate perhaps.”

Lilly added that “to play this character I need to have a certain amount of grace. But I’m also supposed to be an absolutely ruthless, deadly killer.”

Tauriel does not appear in the original book by J.R.R. Tolkien and was created by Jackson. Her name means, “Daughter of Mirkwood” and she is the head of the Mirkwood Elven guard. She is proficient in a variety of weapons, but mainly weilds a bow and two daggers.

Let me draw your attention to the key part of this:

Tauriel does not appear in the original book by J.R.R. Tolkien

Say wha? What’s going on here? I guess there simply aren’t enough characters in the Tolkien universe so Jackson had to create some I guess…