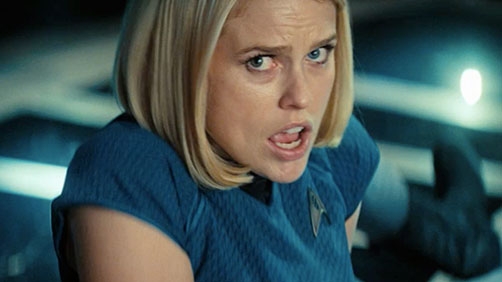 On the podcast last night (find the episode here) where Joe and I talked with Anthony Pascale about Star Trek Into Darkness got me to thinking about this so I wanted to write a bit more about it.

There is a scene you may remember from the more recent trailers, and the same scene is of course in the movie, which features the beautiful Alice Eve. If you came here to see pictures, I’m sorry. I am not going to exploit Alice Eve in the same way Star Trek did.

Alice Eve is beautiful and attractive under any ordinary circumstances, but in the scene in question, she is featured in her underwear. Obviously, a beautiful woman in her underwear is made all the more attractive to most of the male population, and particularly to those of a younger age (though indeed I do not pretend to be immune even if I am far removed from adolescence at this point).

While I was not particularly alarmed by the scene, I found it a bit odd as the scene seemed completely gratuitous. As a Christian (yes, to the new readers we have acquired over the last couple of months, I am a Christian), I was not sure how much in the minority I would be since the majority of the fan base of Star Trek most certainly does not swing Christian. In talking with Anthony last night, it seems that I am not alone and I don’t think my opinion is solely one borne of my Christian perspective (though that does influence all my opinions). What I wish to address here is a bit more general.

Was There a Point?

The thing that bothered all three of us on the podcast, and as Anthony mentioned, many others he’s talked to, is the fact that there seemed to be no point to the scene at all. Alice Eve’s character, Carol Marcus, leads Kirk to a shuttlecraft because they need to disarm a live torpedo. Alice hasn’t revealed her plan yet, but she’s going to take the torpedo to a nearby planetoid so that if it does go off it won’t take the Enterprise with it. The thought in our heads is that she’s going to take Kirk with her. And apparently, she needs to change clothes… in the shuttle… with Kirk in the shuttle… And so she tells Kirk to turn around. He can’t help but take a look (he is Kirk after all).

The problem is the whole scene is pointless. Confusingly, the very next cut is Kirk on the bridge, and Bones is with Carol Marcus on the planetoid with the Torpedo. So the whole thing was simply a VERY poorly engineered scene to allow kirk to gaze upon Carol’s almost naked body.

Abrams has confessed that it was a mistake and that the scene was poorly edited, but I still think he’s missing the point. See this video of J.J. talking about it.

I think he misses the point. No matter how you slice it, this scene was always designed to appeal to the male hormones, and while I understand it, that just isn’t cool. If your film can’t appeal based on the plot, and you have to resort to doing things that actually detract from the plot to draw in your audience, we have some problems.

This is usually known as objectification of women, and that offends not just me as a Christian, it offends pretty much everyone — evolutionists, atheists, republicans, liberals, and others — except for hormonally charged teenaged guys. In other words, it’s primal and animalistic, and it’s insulting to women.

So, instead of sexing it up, what actually happened is that an otherwise classy film degraded to classlessness, which is so beyond not cool that I have no words to describe it. It’s a stain on an otherwise really great film (my other and much more minor quibbles aside).

I mentioned this on the show last night, and Joe and Anthony agreed with me. Since this scene went nowhere, and made no sense whatsoever to the plot, and even confused the heck out of me the first time I saw it, I can only assume that the scene was written and shot solely for the purposes of the trailer and the marketing. Now you can show and say that this movie is sexy because the beautiful, attractive, and hot Alice Eve appears in her underwear. But ultimately the whole thing is a lie because there is nothing and it has to do with nothing and all it does is objectify the woman in question. That is not okay with me.

Star Trek is many things both good and bad, but one thing it is supposed to be is above this sort of neanderthal like thing. We want better Star Trek than this, J.J.! Please let the plots and the characters stand on their own merits going forward. Don’t try to sex up the film in cheap and classless ways.