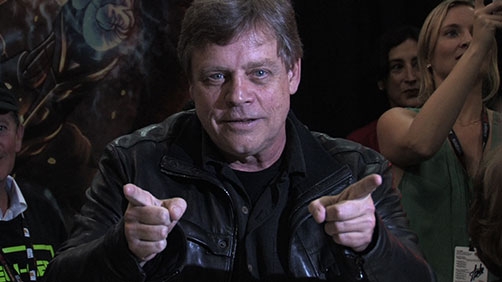 On the three movies that made him famous, Hamill spoke with his tongue firmly in his cheek about ‘Return of the Jedi’ in particular. Regarding the twist at the end of the tale that Leia is actually Luke’s sister, Hamill suggested as an alternative: “Why not have Boba Fett remove his helmet, shake out some beautiful hair, and…Oh my god, it’s mom! She’s been a double agent all these years!”

Okay, that’s a little weird. I hope they don’t let him make any suggestions or additions to the cannon.

Also, man I think this part might make me gag:

...he also defended the changes that George Lucas has made to the films over the years in various special editions, with his son Nathan apparently being one of the detractors. “He’ll say, ‘Oh my god, Dad, Greedo shoots first now!’ I’ll say, ‘Wait, wait, wait. Let’s put this in perspective: Who cares?’ ” Erm, that would be the people who will essentially be paying your wages in this new trilogy Mr. Hamill, so tread carefully.

Say what, come on! I don’t think me and Hamill could ever be friends, my goodness, I’ve disowned friends for this sort of treason. And yeah, be careful about making your fan-base angry. That would be bad.

And, as you all might recall, I have a few good ideas for how to deal with Jar Jar...

That prompted Hamill to also launch into a defense of the prequel trilogy, proving that they’re not quite universally despised. “Jar Jar was supposed to be irritating! He’s irritating to the other characters in the movie!,”  he said. “Those aren’t sorta the movies [my son] wanted them to be, they’re exactly the movies they wanted to make, and I’m not gonna criticize them at all.”

He did go on to talk about the need to balance the practical effects with the CGI, which I wholeheartedly agree with — but more than that, the story needs to be REALLY good. The problem with the prequels more than anything was the story, and or the storytelling was entirely lackluster.