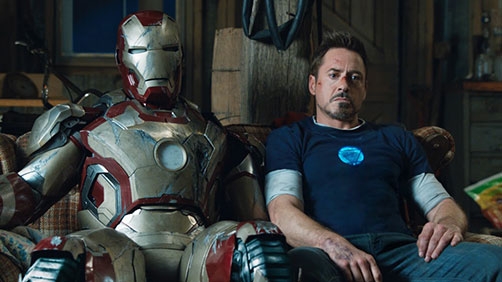 Robert DeSalvo: Kevin, for Iron Man’s third stand-alone movie, what specifically did you want to do differently from the other “Iron Man” films?

KEVIN FEIGE: Well, the most important thing was to make a good part three. The curse of the threequel is something that people write a lot about, and I didn’t want to fall prey to that. One way to try to not fall prey to that was do something different and not rely on making things bigger, bigger, bigger. Although, ironically, this has some of the biggest action set pieces in any of our movies. But, knowing that it would come a year after “The Avengers,” we wanted to focus on Tony again. What we found in “Iron Man” and less so in “Iron Man 2″ was that audiences really respond to Tony—as brash and egotistical as he is. When he’s knocked down a peg and he’s backed into a corner, they like watching him get out of it. With one of our first conversations with Shane, we said we want to metaphorically put him back into that cave and convoy from the first one. People see in the trailer the house coming down, and that is the start of a journey that I hope is very unique and unexpected for a superhero.

Click through for a whole lot more. Lots of good stuff there. I think the Marvel universe is in good hands at the moment.