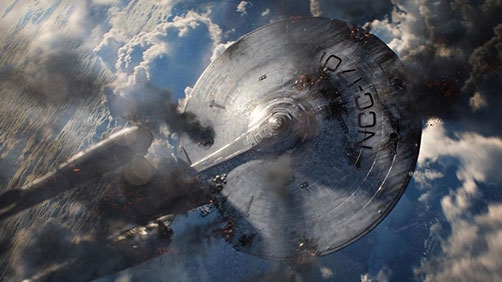 I’ll be writing my review later, but being the nerd that I am, I wanted to give a quick report on the new Star Trek film that we’ve all been so eagerly anticipating.

I purchased my IMAX 3D tickets a couple months ago as soon as they became available. I got what I consider to be one of the best seats in the house — about 3 rows up from the back in the dead center. I was not thrilled with the idea of seeing this film first in 3D, but at the time I believed that it would be the only way to see the film last night. As it turns out, I was mistaken as the general release was moved up to today (the 16th) and I could have gotten standard tickets for a 10:00 PM showing last night. But on some level I am glad I saw the film in IMAX 3D so I can tell you how I feel about that aspect of it.

This is a Star Trek Film

Being a Trekie, I know it’s a bit hard to separate my feelings of love for the franchise from this opinion, but I definitely had the sense with the previous film — the first J.J. Abrams installment in the Star Trek franchise — that it was not fully a Star Trek film. Some of that was okay, some of it was not okay with me.

But certainly, one thing has always been clear, perhaps even more this time than the last time, J.J. and the team would need to balance the type of film needed to make Star Trek more broadly appealing to general audiences, and at the same time, appeal to the Star Trek fan base. It’s a fine line to walk.

I’m happy to report as a Trekie, that even though annoyances remain with some changed elements of the Star Trek universe (why do Phasers feel like Star Wars blasters — yeah, I know in the grand scheme of things that’s such a minor complaint, but why change it?), this film feels far more like a Star Trek film than it’s predecessor. And at the same time, I think it may have even more broad appeal to general audiences than the last film. Those two goals may seem completely out of alignment with each other, and yet that does seem to be the case from what I saw last night.

I saw the film in IMAX 3D, so please hold your comments about IMAX 3D being the only good 3D. I saw it in that format and I was not impressed. The 3D did nothing for me, it did not enhance the story telling, and a couple of times it detracted from the story telling. I intend to see the film in standard 2D later this weekend, probably with my wife as, strange as this may sound if knew her, she wants to see it.

Do yourself a favor, skip the 3D on this one.

What in the world is up with the sound mix? Does anyone know? It has been a long time since I’ve heard a more poorly sound mixed film. Often during action sequences, even middling action sequences, the dialog was hard to hear over the sound and music — well, at times even the music was hard to hear over the explosions and sound effects. During a particular fight sequence, the punching sound effects are so loud and sharp they seem fake. Was it just my particular theater, is it only the IMAX sound mix? It was really odd.

Part of the fun of any Star Trek premiere is to see the fans get into uniform. Some of these are tasteful, some of them are not. There was an “Orion Slave Girl” that was all the way in costume, by which I mean there wasn’t much of it, and all of her skin was painted green, and it didn’t look like a bad paint job. Even though I didn’t like the 3D, one great perk of the IMAX 3D showing is the swag. It’s not much, but it’s the type of swag I like: an awesome poster! J.J.‘s Enterprise may not be my favorite, but she does look pretty doggone nice in this poster. I haven’t decided on my star rating yet — and it does not displace my favorite Star Trek film by any means, but it’s a worthy film to the franchise, far more so than the previous film. Get out there and see it this weekend.