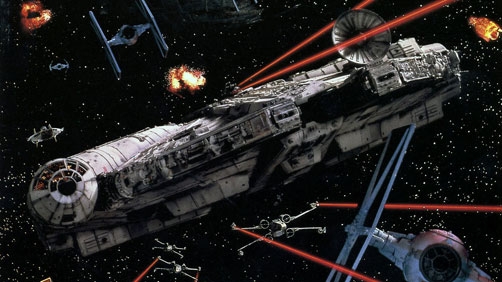 Lucas found that the original title of the third film, ‘Revenge of the Jedi,’ was too harsh, so he softened that as well. It was ‘Return of the Jedi’ now. Everything in the “Star Wars” universe became cuter, cuddlier, and less dangerous, with the contemplative philosophical underpinnings of the previous film replaced with flimsy metaphysical hooey. Even the film’s climax faltered. The original film had one large-scale space battle that involved all the principle characters; it was cleanly told and easy to follow. For the sequel, things were stripped away even further – instead of a space battle, it’s a sword fight (essentially) and one that, since it has been pared down in scale, is even more emotionally involving. For ‘Return of the Jedi’ there are no fewer than three climaxes, happening simultaneously – the business on Endor getting the shield down, which involves Han, Leia and the droids; the space battle to destroy the second Death Star, where Lando is piloting the Millennium Falcon for some reason (with some bizarre alien sidekick co-pilot); and the big showdown between Luke and Vader and the Emperor, something that now involves lightning shooting out of people’s fingertips because the addition of lighting makes an epic cosmic swordfight even more exciting.

Go read all of this right now!

I’ve said this before (in much less words), so I completely agree. Return of the Jedi started down a path that was taken to new extremes in the prequels. RoTJ was the beginning of the end. It’s sort of a sad commentary that the best Star Wars film, The Empire Strikes Back, is the one that Lucas himself had the least to do with.