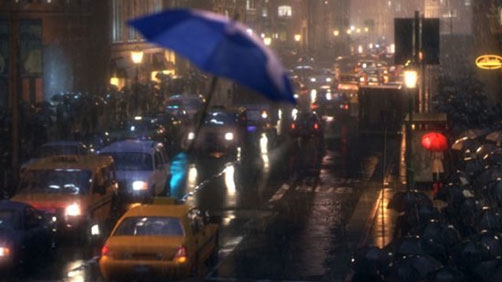 Saschka Unseld, the writer and director of Pixar Animation Studio’s latest short, The Blue Umbrella, was walking down a rainy San Francisco street when he found a broken umbrella on the side of the road. “I stopped because it looked like such a sad thing, and rain was pouring on it,” he recalled. “I was feeling sad for an umbrella; I think that stuck with me.”

This random moment inspired a short that follows an emotive umbrella, which makes its theatrical debut on June 21, preceding Pixar’s Monsters University. “Rain is a magical place,” the director said. “I wanted the soul of the film to be a love declaration to the rain, that celebrates the rain.”

This photo-real approach to the new Pixar short is certainly intriguing, and to me it’s sort of a breath of fresh air for a beloved production company that we sort of feel might be stagnating. We’ve never seen anything quite like this from Pixar before so this will certainly be a fun and entertaining experiment.

Personally, I’m very interested in animated films that bring us closer and closer to photo-real without actually quite getting there. I would love to see the animation step right up to the line but not quite cross it. I think that would be a fun thing to watch and experience. Or, maybe even step over the line for most things, but have a character or two that is over exaggerated or over emphasized on certain features in the manner that so many cartoon characters are.

We’re definitely living in fun technological times when you can almost make Audrey Hepburn come back to life.