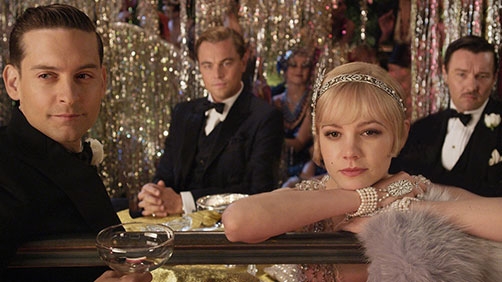 Let me make a confession old sport: I have not read the book, the only thing I know about the story is from the 1974 film version staring Robert Redford. I really, REALLY did not like that film. But let me be clear, unless there are some fundamental differences between the book and both film portrayals I have seen thus far, I really do not like the story, or rather, the perspective that the story represents. It’s a rather subtle thing, actually. But before I get to that, let me talk about this film in more general terms.

This film, based on the 1925 novel of the same name, is set in Long Island, New York in 1922. Nick Carraway is a World War I Veteran, and now he’s a bond salesman renting a house on Long Island. He lives next door to a strange millionaire who throws extravagant parties.

Nick has a cousin, Daisy Buchanan, married to Tom, who is acquainted with Nick by way of college. Nick spends some time getting reacquainted with his cousin Daisy, and her husband Tom. But he also begins to get to know Gatsby as he is mysteriously invited to be a guest at one of the extravagant parties Gatsby throws.

Gatsby enlists the help of Nick to get back into touch with Daisy, who he was once, and still infatuated with. He intends to reclaim her from her husband and convince her that she never loved him.

Personally, I don’t know much about Luhrmann, but when it started getting around that he would be directing this new film adaptation of The Great Gatsby, the excitement from those who were aware of his work seemed to be palpable. Apparently he has a great sense of style and pomp. And let me tell you, both are apparent in this film. I can find very little fault with Lurhmann’s direction of this film and his stylistic choices. In fact I would say I loved 90% of his choices in this regard.

The over-the-top visuals work quite well for this film, the sassy cuts only enhance the tone, and the acting and character portrayal here are top tier.

Most of my complaints with the stylistic choices center around the modern day rap music used for the 1920s dance parties. The choice to go modern here is so wrong that I was shaking my head. I just couldn’t make the leap, I could not be transported there. It was a major bummer to what was otherwise a feast of great storytelling. I understand exactly what Luhrmann is trying to do here — trying to give us a sense of what it was like at one of these parties in the ‘20s in modern day terms, but it really falls flat in my opinion. I would rather have had the film stick to the period of the tale it was telling. Telling a Story With The Right Characters

In general, I often feel that narration of a film by one of its primary characters is a cop-out at best, and a film-spoilingly poor substitute for good story at worst. Yet for this film, I did not find fault in any way with the stylistic choice for Nick Carraway to narrate the film. Indeed, beyond the narration, Tobey Maguire seems a perfect choice for Nick Caraway, far better a choice than Sam Waterston in 1974. Many find fault with Maguire, but I have generally liked the roles he’s been in and this is not an exception.

Then there’s Carrie Mulligan as Daisy Buchanan. Again as my only frame of reference I have to refer back to the 1974 film, and in that film, Mia Farrow’s Daisy seemed far too sensible for who the character ultimately was and how the story unfolded around her. Here Mulligan manages to hit just the right note in her performance, Daisy is not such a sensible girl.

And of course, there’s Leonardo DiCaprio. These three that I mention here are the main characters as far as I’m concerned, but this is really DiCaprio’s film. His performance is simply stunning. He manages to find the right balance of utter longing and infatuation, plus Gatsby’s unrealistic hopefulness for achieving the things that he wants, and yet shows that just behind the curtain lurks something that could be a bit more dangerous, in fact I would argue there is far more danger in Gatsby than most would find to meet the eye. And it’s all there with DiCaprio. One never EVER got that sense with Robert Redford’s portrayal of the character.

I also found no fault with any of the other performances in the film. Tom Buchanan played by Joel Edgerton, and Jordan Baker played by Elizabeth Debicki were also well done.

Thou Shalt Not Covet

But my big problem with this film is the way in which it portrays its story, and how it relates it to you. Our protagonist is really a two pronged deal. First there’s Nick Caraway. It is essentially his story, or his telling of the story. This makes him a protagonist. You care about him, his opinion, and his point of view.

The other protagonist in this film is of course, Jay Gatsby. You also learn to care about what happens to him in the course of the film. You should be aware that in talking about the villains of this film, I will be introducing spoilers. You have been warned.

The antagonists for this film are again two, the first and primary being, as far as I’m concerned, Daisy Buchanan, the other being her husband Tom. But here’s the kicker for me, Jay Gatsby should not be a protagonist. The only one who can and should be as the story is told is Nick Caraway. But in the end, Nick holds up Jay in high regard, and therefore expects us to as well. But Jay Gatsby’s goal was to steal away Tom Buchanan’s wife. He felt some sort of claim over her because he had been in love with her before he went away to the war. But by most moral standards (and I freely admit my moral standard is derived from my belief in God, Jesus, and the Bible and I’m sorry if that offends you), this is not sufficient reason to come waltzing in and wrecking the lives of folks.

Now, obviously, Tom Buchanan is a nasty piece of work as well, and rightly deserves to be called a villain in this film. He cheats on his wife, he keeps a mistress, he is not doing well by her at all. And Daisy can rightly be called a villain because she goes right along with the immorality that Jay coaxes her to commit. But Jay Gatsby cannot be rightly called a hero in this story. There is nothing good there to hold up.

The sad thing is for me that if the end perspective had been changed just slightly, if Nick Caraway had said that he had learned that Jay was not such a great man after all, this film might have gotten a much higher rating from me.

Understand that in saying this, I cannot speak to how well this represents the perspective of the book because I have not read it. I am simply stating my perspective on the story as told.

It’s hard to recommend this film based on that, and yet there is something here. And you, the viewer can take it as a cautionary tale. Additionally, the film has much to recommend it in style and substance. It is an exceptionally well made film with plenty of wow and pizzaz, and on those grounds, depending on how you feel about what I consider to be the negative aspects of this film, you may want to see it.

I can tell you that I will probably see it again some day just because it is such extraordinarily good filmmaking.