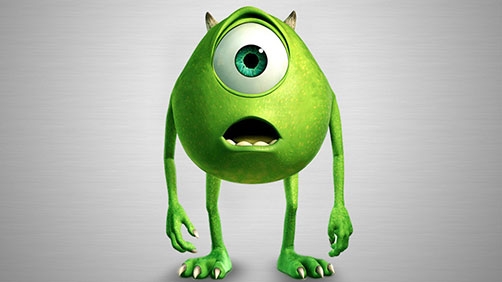 Funny thing is, families did love it. They still do. I don’t think it’s a stretch to say that Monsters, Inc. is widely regarded as one of Pixar’s finest offerings. So with a sequel (Monsters University) scheduled to hit theaters later this month, I decided it was time to re-watch the original and get a fresh reminder of why it’s so great.

“We Scare Because We Care”

James P. Sullivan (voiced by John Goodman) and his one-eyed pal Mike Wazowski (Billy Crystal) are the top scare team at Monsters, Inc., the largest scream-processing factory in Monstropolis. Hilarious hijinks ensue when a little girl named Boo (Mary Gibbs) wanders into the monster world, scaring the populace silly and plunging Mike and Sulley into danger and… and… monstrous intrigue. (Wow. Did I really just do that? Oh, the puns, the puns.)

So what is it — aside from the admirably weird premise — that makes this film so great?

The characters, for one thing. From Sulley to Mike to Boo to Randall Boggs and Mr. Waternoose, the heroes and villains of this tale come to leap-from-the-screen life in true Pixarian fashion — largely thanks to a quality cast of voice actors. Top-tier voice acting is obviously no rarity in Pixar films, and yet even by that standard, Monsters, Inc. is exceptional.

John Goodman as the Hulk-like but affable Sulley? Genius. Billy Crystal as Mike Wazowski, wisecracker extraordinaire? Splendid. John Ratzenberger as the (not so abominable) Abominable Snowman? Heck yes. Steve Buscemi as the oily, conniving Randall Boggs? I couldn’t ask for more. Even though her role demands little more than giggles and semi-intelligible toddler talk, Mary Gibbs is just delightful as Boo. I mean it when I say the movie wouldn’t be the same without her. It Looks (and Sounds) Mahvelous

And how about those visuals? I realize animation has come a long way since 2001, but the art style in Monsters, Inc. is still a joy to behold — from the jazz-kissed opening credits sequence to the zany character design to the elaborate fantasy world of Monstropolis. This the kind of movie you could freeze-frame and stare at for hours without ever getting bored.

There’s the humor, too, of course. I’ve always deeply admired Pixar’s ability to produce silly yet sophisticated gags that strike the funny bones of children and grown-ups alike. Witty banter is here in spades - I can say with confidence that no other Pixar script makes me laugh the way this one does – and the slapstick action (door-jumping, anyone?) is just as much fun to watch the tenth time around as it is the first.

Reviewing this film without tipping my cap to Randy Newman would be a crime. So here it is: the score for Monsters, Inc. is the best score written for any Pixar film, ever. Yeah, I said it. And I’m willing to bare-knuckle box anyone who says otherwise. It’s jazzy, it’s classy, it’s insanely fun. It’s vintage Newman. I’m daring you to listen to “The Scare Floor” and not walk away with a spring in your step and a grin on your lips.

I have a confession to make, and it goes like this: Monsters, Inc. has been, is, and probably always will be my favorite Pixar film. I grew up with it, and I love it to death, so if I sound shamelessly enthusiastic about it, I sound so on purpose. I tossed my “coolly unbiased reviewer” chops out of the window before I sat down to write. You get me?

Just one more thing: If you can watch the final scene, and listen to the most perfect fade-out line in Hollywood history, all without shedding a tear - belay thee for an icy-hearted son of a snowman. I hope you get banished.