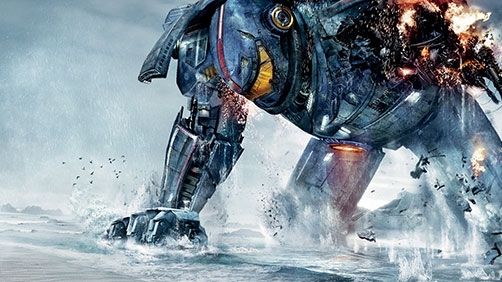 Pacific Rim is coming and we can either go big or go home I guess. I’ve been a little hesitant about this film, I haven’t seen a lot before this to indicate that there may be something more than smash ‘em crash ‘em robot stuff. But this trailer does do a little bit more to add a human element to it, for me at least. Or maybe I’m just in an accepting mood right now.

I don’t know, I’ll give it the benefit of the doubt. I was wanting and expecting to like Man of Steel, and it turned out to be not much more than smash ‘em crash ‘em, so maybe if I’m just seeing things backwards it’s a good sign for Guillermo del Toro‘s Pacific Rim.

Also, in this trailer, we get the full version of the “canceling the apocalypse” speech that has been truncated in other versions. And I’m really like the sound design for this trailer a lot more than the other, more frenetic trailers with soundtracks designed specifically to convey that sense of senselessness and freneticism. So let’s say this is the first trailer to really possibly get my attention.