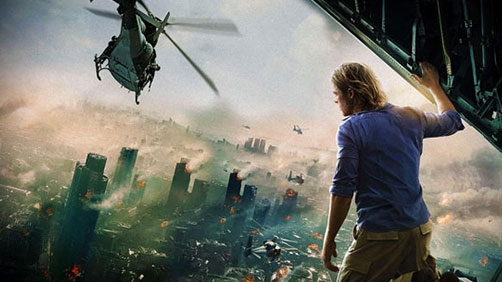 When a zombie pandemic begins sweeping the globe, retired U.N. special agent Gerry Lane (Brad Pitt) finds himself in the unenviable position of trying to stop it.

A lesser man would point out that facing down ravenous undead hordes was most emphatically not in the original job description. But Gerry’s better than that. He may not be the best man for the job, but he’s probably the best man alive for the job - and he’s willing to take a shot at saving humanity if it secures his family refuge aboard a U.S. aircraft carrier.

Within hours, he’s on a flight to Camp Humphreys, a military base in South Korea where the term “zombie” was reportedly first used in reference to the plague. And that’s only the beginning. As governments are toppled and armies are crushed, Gerry races against the clock to fulfill one very simple mission: isolate the source, find a cure.

Did I say simple? Silly me.

Whether you enjoy this film or not will largely depend on your expectations as a viewer. Are you looking for a blood and guts frightfest? World War Z leaves gore at the door, and trades slow-burning horror for energetic thrills. Are you looking for a faithful rendering of Max Brooks’ novel? I’ll be honest: this adaption is almost nothing like the book, and it never really tries to be. Are you looking for a fast-moving, character-driven zombie thriller whose overriding philosophy is “go big or go home”? If so, you’ll love this movie.

Where Has the Blood Gone?

The body count in WWZ is astronomical (even though most of the bodies get right back up again). Cities are overrun, countries are destroyed, armies are annihilated, but the amount of blood spilled onscreen is minimal. For some this may be cause for concern. It was for me, initially. When I learned the film had been slapped with a PG-13 rating, I scoffed in disbelief - not because I’m a gorehound who enjoys watching people get dismembered, but because it seemed like a shameless bid for the under-eighteen crowd, despite the fact that the zombiepocalypse has never been youngster-friendly fare. I’m happy to admit that my concern was unjustified. Shameless bid or not, this film takes its subject matter seriously, and gets as much mileage as it can out of the relatively mild rating. You won’t find the gore of The Walking Dead here, but WWZ‘s mayhem is hard-hitting and scary in all the right ways. Don’t even think about taking the kids.

Where Has the Book Gone?

As I mentioned earlier, WWZ the movie bears little resemblance to WWZ the book. More accurate to say this pic was inspired by Brooks’ novel than to say it was based upon it; similarities between the two are slight. Gone is the Studs Terkel-style journalism. Gone are the loosely connected vignettes. The cast of characters is large, but still small compared to what we had in the original story. And let’s not forget the addition of a main character - something the novel deliberately avoided giving us.

All things considered, therefore, Marc Forster‘s adaption is more a globe-trotting action thriller than a journal of the plague years. And you know what? I’m totally okay with that. This is one of those rare cases where I can appreciate and even enjoy the changes that have been made, while maintaining my respect for the original. Both are excellent in their own right.

In spite of all the budget trouble, last minute reshooting, and ambivalent critical reception, World War Z gets my vote as the best thing 2013 has thrown at us yet. It’s smart, it’s fast, it’s fun, but most of all, it’s human, managing to hit home in both a visceral and emotional way. Result? The biggest, baddest zombie flick we’ve had in years, one that bears few visible signs of the messy post-production patchwork it endured. In Brad Pitt’s Gerry Lane, audiences have a hero they can really pull for. He’s a devoted family man who avoids all the cliches generally associated with that title. Cool under pressure, but not invulnerable. Determined, but not pigheaded. Straightforward, but not one dimensional. Timorous nerds, troubled bad boys, and grown-ups who behave like children are all the rage at the box office nowadays; Gerry is refreshing because he’s a man who acts like one.

The writing is consistently intelligent. None of this “talking down to the audience” crap. It’s taken for granted that you are an adult with functioning cognitive abilities (an increasingly rare specimen, it seems), and all that’s asked is for you to hang on and pay attention.

Unlike many of its kind, WWZ is a zombie film without a polemical agenda. It’s not metaphor for any particular social, cultural, or political ill, and it doesn’t attempt to explain where, how, or why this pandemic started in the first place. It only tries to imagine how the peoples and governments of the world might respond if faced with a plague of this size and potency. Indeed, for all their differences, the film and the book have one thing very much in common, and that is a crushing sense of worldwide panic and devastation.

Speaking of devastation: the action in this film is stunning. You may be wary of Forster after his muddled Bond outing (Quantum of Solace), but I assure you, he acquits himself beautifully here. From a nail-biting stairwell chase, to the fall of Jerusalem, to a cat-and-mouse chase in a WHO research lab, each set piece is slicker and more arresting than the last, aided by an immaculate blend of choreography, prosthetics, and elaborate CGI fakery that bring the risen dead to leaping, rending “life”. These aren’t your dad’s zombies. No shambling Romeroesque rotters here. Forster’s beasties will be on you in a flash, ripping and tearing with feral gusto, turning you into a fellow Zed-head before you even know what bit you.

On that note, you may want to skip 3D. Unless you want to spend the entire time jumping out of your seat in an effort to avoid the swarming infected. Your call.

Needless to say, I’m pleased with what’s been done here. Very pleased. WWZ is clever, gripping, and unusually serious-minded summer entertainment, delivering a fresh spin on a familiar genre. I’d love to catch it again in theaters, but even if that doesn’t happen, I’ll be eagerly awaiting its release on Blu-Ray and hoping that maybe – just maybe – we’ll be treated to a sequel.