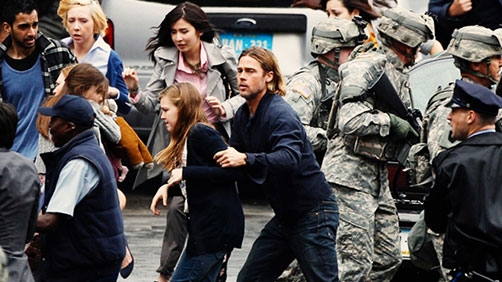 Speculation has swirled ever since “World War Z”, the forthcoming zombie disaster movie starring and co-produced by Brad Pitt, was pushed from last winter to this summer by Paramount Pictures to allow for a wholesale rewrite and a reshoot of its final act. Such drastic changes so late in production rarely bode well for the success of a film, but some early reviews suggest “World War Z” might not end up dead—or undead—on arrival.

In a glowing review, Variety’s Scott Foundas says the film “emerges as a surprisingly smart, gripping and imaginative addition to the zombie-movie canon.” He continues: “Showing few visible signs of the massive rewrites, reshoots and other post-production patchwork that delayed its release from December 2012, this sleekly crafted, often nail-biting tale of global zombiepocalypse clicks on both visceral and emotional levels, resulting in an unusually serious-minded summer entertainment.”

Yeah… I’ll believe it when I see it. From what I can tell that film has had a troubled production.

Also to my point yesterday, I’m coming into this with absolutely no knowledge of what it is and I could not tell from the trailer what it was about. I had to go digging and searching and reading about it to even get that it was about Zombies. My point is that they are doing something wrong in the marketing here.

I’m still skeptical that this film is any good.