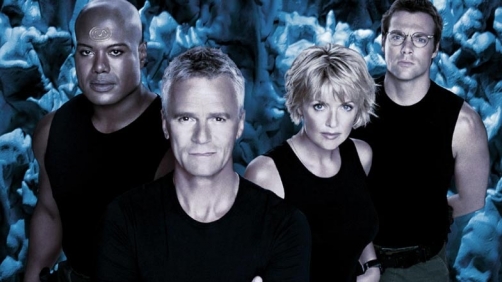 That way, in 10 years, we’ll be watching new Stargate, anticipating the next TV series, playing the video games, hunting for the toys, and grabbing tickets to the next convention … and not just remembering how fun it all was while it lasted.

Even though it’s sad, I do agree that this is the way forward. I don’t have to like it, but it is the way forward. Where I differ with Darren is I think I would rather just let Stargate die than to have it rebooted into something I don’t care about. He says:

...you need to know that I am a “franchise fan.”  There are different ways to love a multi-show, multi-media franchise like Stargate, you see.  I understand that my way is not everyone’s way. And that’s cool.  Many people aren’t fans of the concept so much as they are fans of SG-1, or Atlantis, or Universe, of Richard Dean Anderson and Michael Shanks, Joe Flanigan and Torri Higginson, of the characters and villains and great one-liners that have made up the fabric of those 14 years.  If those shows are never coming back, some fans will stick with their DVDs and won’t come back, either.  And that’s totally fine.

I, however, am first a fan of the Stargate concept.  I’m very interested in anything that takes place in this universe, making use of gate travel to explore other worlds, meet alien species and displaced human cultures, and get into trouble along the way.  So the idea of a big-budget, big-screen trilogy of Stargate movies is incredibly exciting to me.

This is, I think the key difference between me and Darren. The concept is fine, but I fell in love with the characters and the fabric of the two shows. I want more from them. I don’t want this remained, revisioned, revised version of Stargate that Rolland Emmerich wants, who has no respect for anything that was done after him.

And as I think about it, I think this is the irksome thing to me. Rolland Emmerich has zero respect for what was done with the franchise after his original film. None. And that bothers me. On the one hand, I understand a little of how he must feeling, having lost creative control of his work and seeing it wander far away from his vision. But he’s unwilling to admit that it was good and that it could be built upon. That’s what’s nagging at me.