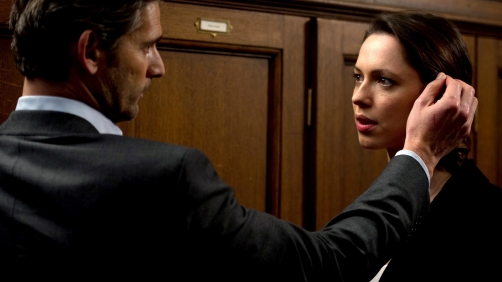 Everything is being recorded. Someone is always watching. You’re always under surveillance. You are just a pawn. Yada, yada, yada.

That’s what this film attempts to portray to you. That is what this film attempts to sell you on. The only problem is that it has this premise but then doesn’t quite know what to do with it. It’s sort of like a dog that chases a car: I’m sure the dog has no plans for what happens if he ever caught it. And that’s not unlike what’s going on here. They have this premise that they caught — they latched onto it and they have no idea what to do with it.

But let’s not get ahead of ourselves. Let us first dive into the elements of the plot.

We begin to see business as usual in London. Busy street, pedestrians walking, buying things, chatting, acting normal. We begin to see multiple frames fill the screen that are obviously of closed circuit security recording devices. A truck backs into a place it doesn’t belong, and boom. This is followed by a montage in which is conveyed the idea that some or most of this case, and therefore the trial, need to remain top secret. This seems to provoke some public outrage.

But then, it’s several months later and we start following the activities of the appointed attorney who will be defending the apprehended suspect against whom there is much evidence. And there’s also a second attorney who’s sole purpose and presence is to deal with the classified material. She gets to see it and look it over, and only she gets to be part of the closed session court to hear evidence and decide whether national security warrants keeping such evidence from the public.

Of course, there’s also the fact that the only reason the public defense attorney has the job is because his predecessor “committed suicide” under dubious circumstances. This indicates that there is more going on here than meets the eye.

I actually really liked the low-key thriller aspect of this film. It didn’t feel the need to do a lot of smash cuts or shaky cam or other such cinematic tricks to make you feel like something crazy was happening. In fact, slow, steady camera work, slow intentionality, slow reveals, stationary closed circuit cameras are the name of the game here. And that is actually quite refreshing in today’s world of cinema that often likes to speed things along by pacing things such that it is impossible to follow. In addition I really liked the premise and much of the execution of that premise. Someone is or many someones are pulling the strings behind the scenes, and those sinister someones are closely connected to the government. With everything that is going on these days it is an idea that resonates, and not without good reason. With electronic surveillance methods and out of control governments it is something that we all think about and worry about.

And of course we all like a good, ordinary hero of a man (or woman). A man who, under ordinary circumstances acts in an extraordinary way. This film has something to offer us here. Martin Rose is an ordinary attorney who, upon beginning to see what’s really going on here, acts in an extraordinary way to do what needs to be done for justice. It’s something we can all appreciate and all wish we could be.

Along the way we meet up with several characters. Eric Bana (Star Trek [2009], Hulk [2003]) is a man named Martin Rose who is the public defense attorney. I know a lot of people don’t particularly like Eric Bana, but I thought he did excellent here, bringing intensity and nuance to his character. Rebecca Hall (The Prestige, Iron Man 3), is the closed session defense attorney who’s job it is to convince the judge that the private evidence needs to be brought to the public eye despite whatever consequences it may have for national security — in fact that may be one very good reason for bringing it to light. Shadowy government activity doesn’t do well in the light, and none of us likes shadowy government things. Hall too is excellent here. I liked her in Iron Man 3, and I like her here as well. Jim Broadbent (Cloud Atlas, Harry Potter) is the shadowy Attorney General. As always he’s a joy to behold. He’s a character actor to the end and he pulls this one off quite well. Julia Styles is a New York Times reporter, and she does a good job. But she doesn’t get much screen time and is killed suspiciously pretty quickly.

I have one more character to mention, but I did not want to do so in the context of “The Good” headline. Ciarán Hinds (Harry Potter, There Will Be Blood, Amazing Grace) plays Devlin, who is Martin Rose’s direct superior. Unfortunately he didn’t feel very invested in the film or the plot. Firstly his character felt a bit shoehorned in. Necessary because of the small but somewhat important role he would play in the plot, but ultimately a distraction and completely unnecessary. Secondly it felt as if he knew his character was a bit pointless and so acted accordingly. I never for a moment believed his performance. Although at least what was possibly his most poorly delivered line was ultimately cut from the film. You see, in the trailers there was a line he spoke to Eric Bana’s character that went something like, “MI5 don’t kill people on the mainland, what have you gotten yourself into?” It was in more than one version of the trailer and it was an awful line, poorly delivered. It was indeed cut from the film, but it does give an insight into how poorly constructed and thought out this character was.

And for that matter, what is there of Devlin is completely predictable. I predicted to myself very early in the film that he was not on the side of our heroes.

The film also does a poor job at conveying the privacy concerns and government surveillance conspiracy we were promised from the trailers and from the opening of the film. It’s like I said at the beginning of this review: they have this concept and they have no idea what to do with it. Often, it seems the film forgets that it even promised to show us that element, only occasionally cutting to some security camera watching the actors walking by. It never really ties into the plot.

It’s also a poorly thought out construct that the classified evidence which Claudia must deal with prevents her from communicating with her colleague by law for much of the film. So much for any chemistry our leads may have together. So the film has to resort to simply telling us the pair had chemistry and that is why Rose is so compelled to protect and save her when push comes to shove.

This film has no ending. I’m not making this up. The film has an opening teaser and two very slow, tortured acts. Act three, and the ending are completely MIA. Unavailable. Not present. Gone! What were they thinking? What happened? The plot does not wrap up, the ending we are presented with (which is not an ending) is not satisfying nor does it feel like an ending that is supposed to not be satisfying, the film just simply cuts to the credits. I think the filmmakers were trying to strike a discordant note — they were trying to evoke an emotional reaction of injustice. But it didn’t really work. No, in fact, it made me upset and irritated more than anything. This all smacks of serious pre-production and/or production troubles that were never resolved. It’s not unlike Star Trek: The Motion Picture (yes, the running joke continues, everything leads back to Star Trek) in which they did not have an ending when they started filming and were writing on the set and coming up with ideas. Which makes the end feel a little strange, rushed, and incongruous. Well it’s much worse here with Closed Circuit. Making a film that has no ending is never a good idea.

One of the other problems with this film is that, despite the fact that in some way it was refreshing that the film didn’t feel the need to drive the plot with cinematographic trickery, shaky cam, smash cuts, and the like, it was pretty slow moving a lot of the time. Much of the time it was too slow moving. It could have done with speeding up just a little. This of course would assume the presence of an act 3 to fill in the space that would be left by speeding along a little bit.

This film may be somewhat worth watching once (maybe), but it’s certainly not worth wasting your theater budget on. Wait for DVD or Blu-ray.