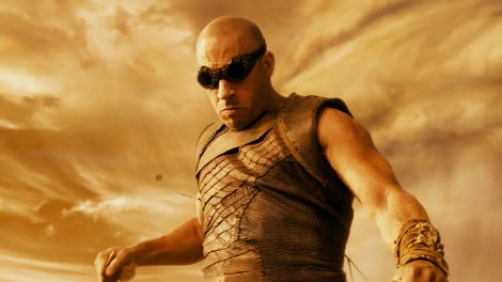 I suppose I should preface this review with two things: 1) I did not watch the first two films in this series due to lack of time and interest; 2) I never had any interest in seeing this film. With those items in mind, here I go.

Due to my lack of background on the character, I’ll leave it to IMDB to tell you what the film is about:

Left for dead on a sun-scorched planet, Riddick finds himself up against an alien race of predators. Activating an emergency beacon alerts two ships: one carrying a new breed of mercenary, the other captained by a man from Riddick’s past.

The entire first twenty minutes or so of the film seem determined to show those new to the franchise (i.e. me) who Riddick is and what he is capable of. We’re treated to scene after scene of this superhuman fighting monster after monster, which would be just fine and dandy if it all didn’t become a bit of a bore. After the first two instances of Riddick defying the odds and cheating death, I thought to myself, “Got it, now let’s move on.” But we didn’t. We still have several more scenes of nothing but him travelling a barren wasteland of a planet, killing strange creatures before they can kill him, with Vin Diesel’s deep growl of a voice providing us with what the character is thinking and how he came to be in the situation where he is. He’s hardcore. I get it. Let’s focus on something else.

“Are you afraid of the dark?”

When we’re finally introduced to other characters, it’s a bit underwhelming because they aren’t any good. First to appear is the mercenary Santana (Jordi Mollá), who makes it clear to us from the start that his only desire is to cut off Riddick’s head, placing it in a box to collect the substantial bounty on his head. As the film progresses, it becomes evident that the main purpose of his character is to provide a sort of comedic relief, which fails in its attempt to be funny. His banter with Dahl (Katee Sackhoff), who landed with another crew seeking out Riddick, is also a poorly executed aspect, with Dahl’s responses to his often crude comments often consisting of the “F word.” In fact, the F word is used a LOT throughout the film, to the point of exhaustion. I can generally overlook its usage once or twice in a film, but beyond that (and certainly as many times as it’s used here) it becomes an extravagant earsore. The rest of the characters don’t bring much else to the table either; aside from the various lackeys, the only other “main character” is Boss Johns (Matt Nable), leader of the second ship to land on the planet. His motivation for hunting down Riddick is pretty thin; Santana’s want for money is more believable reason to hunt down a man than is Johns’ desire for the truth behind the death of his son (who, Wikipedia tells me, was a character in the first film in the series, Pitch Black).

Aside from the poor characters, the dialogue between them is even worse. Banter is often painful in its attempts at humor, the foul language runs amok, and pacing is pretty slow. I also hated the cinematography of the film, with the CGI looking unrealistic (meaning the CGI creatures were very obviously CGI, not unrealistic in nature) and the over-stylization of the locations reminding me too much of Zack Snyder’s 300, another stylized film that I didn’t like. Last but certainly not least, there is needless nudity at two separate points in the film…it literally serves zero purpose in the context of the film. So there’s that.

This film has its audience. I know that. And I tried to be as open-minded as possible while watching this movie. Though it wasn’t a film I particularly cared to see, I had no pre-conceived notions on its quality, and, because I haven’t seen Pitch Black or The Chronicles of Riddick, I had no frame of reference for just how good or bad it might be. Perhaps its that lack of franchise familiarity that made me dislike the film so much. I’ve been told that Riddick is a better film than its two predecessors, and, if I had seen them first, I’m sure I would have liked this one more than I did by comparison. But I only have the opinion I have, and it’s not a good one: Riddick is incredibly violent, loaded with foul language and poor characters, and, though I’m sure it appeals to certain people who like this kind of film, I’m not one of those people and simply can’t recommend seeing it.