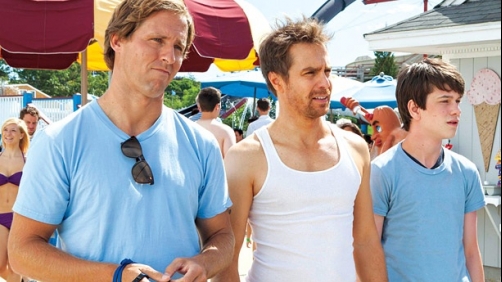 The Way Way Back tells the story of Duncan (Liam James), a young teen who is being forced into a vacation with his mother (Toni Collette), her boyfriend Trent (Steve Carell), and his daughter. As they approach the beach house, Duncan sitting uncomfortably alone in “the way way back” seat of the station wagon, Trent asks Duncan what he would rate himself on a scale of one to ten, personally calling him a three. Comments like these don’t help Duncan’s already-damaged self-esteem; he’s socially awkward beyond repair, and his only comfort is found in a bike discovered in Trent’s storage shed. He soon meets Owen (Sam Rockwell), manager of a local water park, who is Duncan’s opposite in every way: he’s loud, painfully honest, and he’s also a jokester. When the two connect and Duncan is offered a job at the water park, he begins to make friends and break out of his shell despite rising tension in his home life.

Liam James as Duncan is fantastically awkward, making the character all the more endearing. His growth throughout the course of the film is palpable — we cringe at the start of the film as he makes a painful attempt to talk to the neighbor’s attractive daughter Susanna (AnnaSophia Robb), laugh with him as he spends time with Owen, and feel compassion for him when he later has to say goodbye. Speaking of Owen, Sam Rockwell is hysterically funny in the role, but he also grounds the character and is able to focus on the serious moments when appropriate. His character is often crude and irresponsible, but he is never cruel; he talks to Duncan as if he was talking to an adult or, rather, an equal, which is new for Duncan, who is used to being talked down to by Trent. Trent is a new kind of character for Steve Carell, at least for me. I’m used to seeing Carell in comedies like The Office or Get Smart — his character here is anything but comedic. In fact, he’s actually a major jerk, which Carell pulls off surprisingly well.

Aren’t You Sick of Yourself?

The main theme of the film is growing up, literally for Duncan and mentally for Owen. Over the course of the film, Duncan branches out and becomes more comfortable in his own skin, and he learns to stand up for himself and to accept who he is. Owen still acts a bit immature, much to the chagrin his coworker Caitlyn (Maya Rudolph), but learns to take responsibility for his actions, and he also learns that there is a time for work and a time for play. Trent actually grows in the opposite direction, though. His first scene, in which he ranks Duncan a three on a ten-point scale, is rude but it almost seems affectionately honest. His term of endearment for Duncan, “Buddy,” seems to become more hostile the longer we watch and learn that he might not have the best interests in mind for Duncan and his mother. The growth of these characters is done quite well, with us appropriately growing to love Duncan and Owen and dislike Trent all the more.  The ending brings everything together wonderfully full-circle. You’ll see what I mean when you see it for yourself.

Go Where the Love Is

Overall, I LOVE this film…I’ve seen it a total of three times, and I am anxiously awaiting the Blu-Ray release so that I can purchase it and watch it again. I would actually categorize it more as a drama with comedic elements than as a straight-up comedy, with standout performances coming from Liam James and especially the hilarious Sam Rockwell. The movie is well-written, well-acted, and it is a brilliant coming-of-age story that provides several valuable life lessons for you to walk away with — most importantly to be who you are, and don’t change for anyone else. Accept others for who they are and treat everyone with respect.