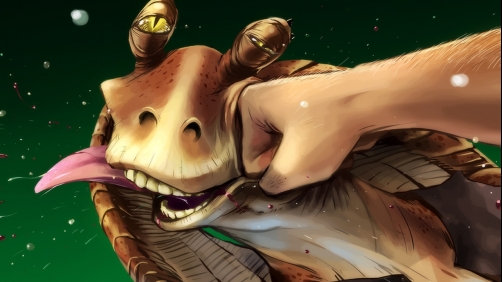 Alright, lets establish something right up front before I share this video with you: There are only three Star Wars films. Three!

Ahh, but that said, George Lucas did make some other films that masquerade as Star Wars films. While I consider Episodes II and III to be at least watchable, Episode I is a real complete and total mess. Much of that can be blamed on Jar Jar. I’d say maybe even a good 50% of the badness of that first prequel can be blamed on Jar Jar actually now that I think of it — or at least the thinking and filmmaking behind the film that led to the inclusion and stupidity of Jar Jar anyway.

That is why I enjoy this little video so much. There’s obviously a little bit of fancy editing at the end. I have to be honest and say that I do not remember ever seeing this film. I think it must be a deleted scene and since I do not like the film I’ve never bothered to watch the deleted scenes.

Anyway, this is my dream come true and I hope you enjoy it too.