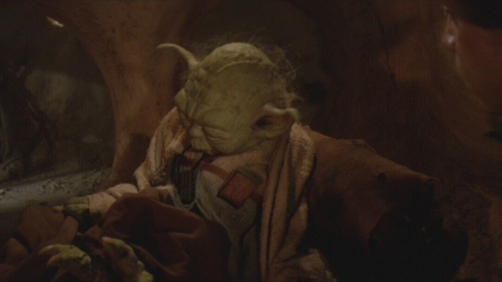 This is an interesting deleted scene that I’ve never seen before and it’s too bad that it got cut. As it stands, Return of the Jedi is my least favorite film in the original trilogy. While it’s still good, and still watchable, there are signs of where Lucas would ultimately head. Silliness and simplicity were the name of the game with this film. And cutting meaty scenes like this didn’t help. Had this and probably many other more heave and weighty scene remained in the film, I think it would have been far better of for it.

You see in this deleted scene, Yoda tells Luke about how he and Obi-Wan lied to Luke about Vader. And Obi-Wan wanted to tell Luke but Yoda would not let him. They wanted to change the nature of who Vader was. They didn’t want Luke to ever consider him in light of the fact that Vader used to be one of the good guys — that he in fact was Luke’s father. Yes, we still get all this in the film, but it does not hit home quite as much.

Anyway, this is a good one. Check it out.