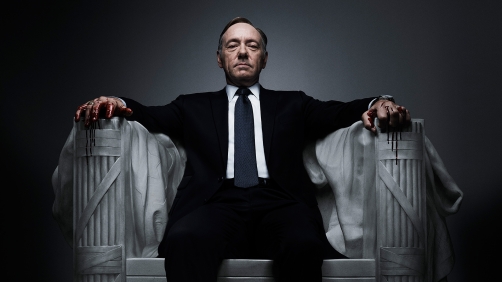 One of the surprise delights of last year was the Netflix original series House of Cards. It was a dark political thriller that followed the antics of villain Frank Underwood as he set his sites on the white house. No one and nothing must stand in his way! Kevin Spacey did a phenomenal job making you love to hate such an evil scumbag. The political climate in our country is pretty ripe for such a show given that no one on either side of the political isle is particularly fond of their politicians. Indeed I think the consensus is that with few exceptions, every single politician currently in office should be thrown out and possibly hung for treason. Frank Underwood may take things to an extreme, but I think most of us have suspected our politicians of at least one of the things that Underwood has done here in this series so far.

The beginning of the trailer looks a little bit re-hashy, but don’t let that fool you. Brand new footage will begin to reveal itself just before the half-way mark. It’s funny how what is probably the most cinematic television show I have ever seen is brought to us by a completely digital delivery method of what is now a completely digital company.

Season 2’s 13 episode run will be released simultaneously on February 14.