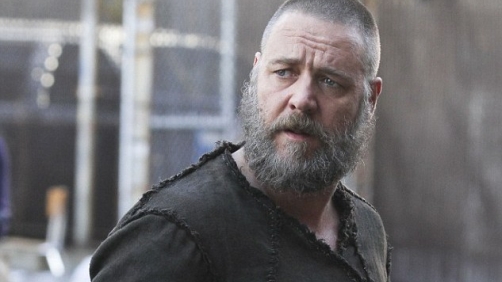 I’m not going to try to pretend that I think there’s even the remotest possibility that this film will stay true to the Biblical narrative, or even that those making this film believe it’s anything more than a fanciful fairytale of a story. Indeed, every other film site/blog that has had anything to say about this upcoming film has made it pretty clear that the story is based on the Biblical “myth” of a great flood. But I do think there’s the slightest possibility that this film might be fun (I’m not holding my breath).

I did figure out one thing from the previous trailer and the scene where the fire is spreading seeming from a sword being stuck in the ground. I’m not sure why it didn’t come to me right away, but I think that may be the angel with the flaming sword guarding Eden. It’s a bit of a strange depiction, but we don’t really have much of a description in the Bible. The fact that we saw the taking of an Apple from a tree (it is commonly thought that the forbidden fruit is an Apple though in truth we don’t know what kind of fruit it was as far as I know) seems to confirm the idea that we’ll at least get a quick overview of the fall and therefore probably see the angel guarding Eden.

In any event, it will be interesting to see if this film will be any good or not.