There’s a Dragon in the Theater! - What to See This Weekend 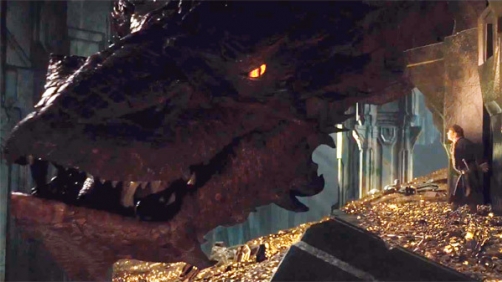 You know, regardless of your feelings about the first installment in this trilogy, you’re probably going to see it at some point. Good or bad, for better or worse, The Hobbit films are/will be a cultural phenomenon. And there’s certainly far worse things in the world.

But a Tolkien adaptation is not your only new option this week… well actually that depends. Saving Mr. Banks is in limited release this weekend. I can’t actually figure out where it’s playing but who knows, maybe it’s somewhere near you.

If you were keeping up with MovieByte last year around this time, you might recall that while I did not exactly pan the film and call it worthless or trample it to a million pieces under the feet of my bunny rabbits drawing my weird woodland sled thing, I definitely had some criticism of that film. Indeed, I had criticism even of the whole idea of making a single book into a trilogy. I continue to maintain that this trilogy would have been fantastic as a single film, trimmed to be watchable, inclusive of the parts that are important, and certainly not added unto for no good reason.

I’m spending a lot of time talking about the previous film so let me come to the point. I don’t expect any of this to really change in this second film. I hear it’s a bit faster paced, but it will likely be a very similar film. As such we can expect to enjoy it or not just about the same. And I did enjoy it. I’m enough of a nerd and fantasy geek that it would have had to be a lot worse to keep me away from the theater.

My point: you’ll want to see this one, set the proper expectations, head to the theater, and enjoy yourself.

I don’t really harbor the best of feelings toward Marry Poppins, but I suspect that’s because I watched about 50 bazillion times as a kid, and then the 50 bazillionth and one broke the camels back. I have not watched the film in many years and I’d like to revisit it.

Regardless, Marry Poppins is quite the well loved classic — Julie Andrews and Dick Van Dyke obviously helping by bringing their enormous charms to the film. And I have found the trailers for this film quite intriguing. While I would not have thought any such film could capture my interest a couple years ago — a film about making a film — this is the second film to do so in recent time. I’d really like to see this. With the Christmas schedule coming upon us, I don’t know when I’ll have time, but I hope to see it before the new year.

Chad and Joe sure liked it. I got “deathly” ill at the beginning of this week, lost my voice and everything, so Joe stepped in and reviewed the film with Chad on The MovieByte Podcast, so you should check that out.

Chad, Fizz, and I talked about this film on The MovieByte Podcast Episode 70, and I released a video reviewabout the film earlier today. Be sure to check those out!