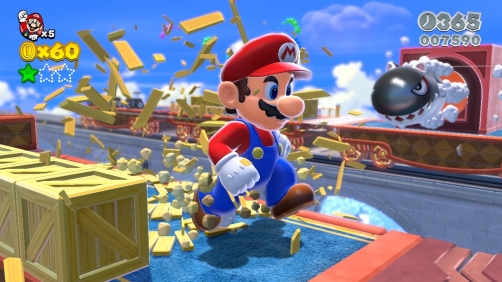 I’ve gone through all the movie news over the weekend and there’s not a lot going on I care to talk about. And I am singularly uninterested in anything that happened at the GRAMMYs so, though it’s a stretch for me to figure out exactly how this is related to movies, I thought I would mention this thing that I’ve had in my saved items for a few days:

We are thinking about a new business structure,” Iwata said at a press conference yesterday in Osaka, Japan. “Given the expansion of smart devices, we are naturally studying how smart devices can be used to grow the game-player business. It’s not as simple as enabling Mario to move on a smartphone.

It’s a little sad to me that Nintendo is having a hard time of it. I like Nintendo a lot and as far as I’m concerned, the Mario franchise is the best game franchise on the market right now. I admit that I just don’t get some of these games that most of the kids are into these days though. Still, Nintendo has had a lot of hits and misses. Obviously they had a big hit with the NES and again with the SNES. While the Nintendo 64 was not a “miss”, it was not the massive success the previous two consoles had been. And the GameCube was just embarrassing.

But then Nintendo knocked it out of the park with the Wii. I think many analysts are still baffled by the Wii’s success. And I think Nintendo itself took away the wrong lessons about the console’s success.

The Wii U has been nothing short of a disaster. Nintendo’s long history of treating third party game developers like the scum of the earth is coming back to bite them in a big way with this console. Couple that together with the fact that the game pad is simply not the same innovative original thinking that got them into the Blue Ocean Strategy territory that the Wii did with the Wiimote.

In addition, though I really like my Wii U, I did not at first. The console was simply not ready for release when Nintendo released it. Though it has always been the case in the past with console releases that original titles are limited at console launch, we live in a different world today than the past game console launches saw. We live in a world where kids play a lot of games of all kinds any time they want on their smart devices and tablets. Nintendo needed to work on a few more launch titles, and they needed to work with third party developers to have even more launch titles available.

And another way in which the Wii U was not ready was the software. When I got my Wii U console it was terribly buggy and SLOW. I mean dog slow. I almost took the console back. Literally, I would click on the Super Mario Bros. U icon and the console would freeze for two minutes (I’m not exaggerating). I thought there was something wrong with the console. As it turns out it was just a software issue and there was finally a massive update (that took over an hour to apply by the way) that fixed a lot of issues. But I think that also really hurt perception of the Wii U.

Now, this brings me to where we are at today. Regardless of the fact that I think the Wii U is not as bad as everyone seems to think and I’m really glad I have mine (and also, if you haven’t played Super Mario 3D World yet, do yourself a favor and go get it or go to a friend’s and play it right now), the market has decided it’s not a good console. Nintendo has to do something. Everyone thinks they need to make games for iOS and Android. I’m not convinced that is correct. It’s not quite that simple. First of all, they would not simply be able to port Mario to touch screen without massively rethinking how the character and game play works. I’ve tried to play a few sidescroller and 3D platformers on a touch screen. It’s just not a good experience. Mario, and most of Nintendo’s other traditional games require physical controls. Nintendo would have to break some new ground on the gameplay front.

Additionally, how much could they realistically charge for games on Smart Devices, and how many would they have to sell to break even? Consider that game titles are where Nintendo makes the majority of their money. Traditionally, Nintendo console titles are around $60/each, and handheld titles (DS) are around $40/each. Most of us are unwilling to pay more than a few bucks for games here and there on smart devices and tablets. That’s a long way from $60. So can Nintendo fund continued development and operation from that and would there be enough interest in those game titles?

I’m not saying Nintendo should not work something out in this space, I’m just saying that it’s a lot more complicated than we all think it looks like to us from where we’re sitting.

So there’s my thoughts for the day on a non-movie related topic.