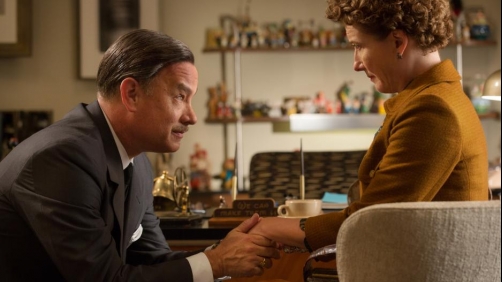 Let me be clear from the outset, I enjoyed this film quite a bit. That said, I feel like I would have enjoyed it better if I actually liked Disney’s Mary Poppins. As it is I really do not like Disney’s classic film that much. While P.L. Travers’ concerns and complaints about the film may be too far reaching and come from a bit too dour of an attitude, I tend to agree with her underlying issues regarding Disney’s version of the film. It’s too goofy, doesn’t make a lot of sense, has no coherent story, and doesn’t drive its point home. If the whole point of the Mary Poppins story is the saving of Mr. Banks, then the film does a pretty poor job of telling it. This is not my official review of Mary Poppins, but allow me to just ask why on earth we run off and spend so much time with Burt and Mary in the chalk painting? No really, I mean the kids disappear for over 10 minutes while animated penguins prance around Dick Van Dyke and Julie Andrews. It’s crazy stupid. And where’s Mr. and/or Mrs. Banks in all this? And what’s with all the dancing around on the roof? Having recently re-watched Mary Poppins, I was left wondering how much film would be left if they stuck to the story they were ostensibly telling. Maybe (MAYBE) thirty minutes.

Suffice it to say I am one of 3 people on this entire planet that do not like the film. Oh it has its moments of charm, but it is so overshadowed by it’s lack of good sense in story telling. I have described this film before as at times utterly delightful, and yet woefully misguided and annoying.

It’s always hard for me to tell just how much a film like this is to be believed. But apparently P.L. Travers really didn’t want to release the rights of her book to the likes of Disney. She had no intention of there being any animation. Mary Poppins was just not to be the sort of whimsical personality Disney had in mind for her. But Walt Disney was bound and determined to make Tavers’ book into a film, but in his own way and with his own ideas. She would only sign the rights over once she had overseen the script writing process and approved every single dot of an “i”, cross of a “t”, and the very punctuation on each page.

Again, as our film would have it, she was none too personable and she wasn’t having any sort of nonsense and no silly business. She was really, in fact, quite an un-likeable person. At one point, when she’s given in and settled for the film to be a musical, and the script is “nearly” “approved”, she discovers that the penguins in the aforementioned scene are to be animated. She storms right out of Disney’s office, straight down to the airport and back to her home in London.

Fortunately, or unfortunately depending upon your perspective, Disney chases her down. He catches the very next flight to London and sweet talks her into signing over the rights of the film. The film is made, Travers cries at the premiere, and we all live happily every after.

One of the better aspects of this film is that it weaves in the narrative of P.L. Travers tragic childhood. You see, her father can’t put the bottle down. Life is all rather too much for him and he’d rather be off living in a dream world and playing make believe with his daughter. The bank for which he works is to him a dreadful and painful existence. In the end, he drinks himself to death leaving our P.L. Travers behind. And the woman who was supposed to come in and make everything right, who was supposed to save her father and set the household back in order, failed to do so.

But one thing was sure, little “Ginty” — as Goff called our young P.L. Travers — really loved her father. It was devastating to her when he passed. This had a profound impact on her and shaped her life. We can see why she became the somewhat bitter old woman that she did.

Obviously Emma Thompson is the star here and she does a marvelous job of making you sort of hate and sort of love P.L. Travers. Her curmudgeonly manners recall nothing of any of the previous roles I’ve seen her in — certainly not as Agent O in Men in Black 3, and definitely nothing of Sybil Trelawney from the Harry Potter series is present. I always like to point this out because it’s the mark of a good actor. Too often actors in various roles make me recall something of one of their former roles.

Emma makes light work of portraying the obstructionist attitude and behavior attributed to Travers — indeed during the credits they played a reel of the tape she insisted be recorded during the script writing sessions and Emma Thompson’s portrayal of the behavior and vocal mannerisms is uncanny.

One of the lesser billed stars in the film though is Colin Farrell whose great work here really takes the film to the next level. His portrayal of the father who loved his daughter and wanted to love life but couldn’t put the bottle down was nothing short of perfection. Again who knows to what extent the telling of this story is accurate but Farrell was perfect for the story being told.

One of my complaints though is that Disney is the company that made this film and if feels a bit too much like a PR film. Especially since Walt Disney essentially lied to Travers and assured her of things he had no intention of sticking to. And it feels a bit glossed over and white washed in the film. Seriously, Travers stipulated and Disney agreed to no animation. But then those darn penguins show up in the middle of the film. Animated.

And then, come on, he failed to invite her to the premiere. I mean, I might not have either if I were Disney and the way she treated him and everyone else would make me concerned for any negative PR she might generate but still, it was her story. She should have been invited to the premiere. This feels a bit glossed over by the film.

By the same token, some have said if this film were really true to life, we would not have liked Travers in the slightest. So the film effectively feels a bit like a PR campaign that you have to pay to see, which is a little disappointing to me.

A Spoonful of Sugar…

…helps that medicine to go right down. As I mentioned at the outset, I did enjoy this film. It’s fun regardless of how I feel about Mary Poppins​, to go back and get a glimpse of what went on behind the scenes. And the film has a little of most of those qualities one would want — drama, humor, fun, tears, and a great sense of story that Mary Poppins the film certainly does not have.

So go for the history and the proposition of Emma Thompson’s delightful performance, and stay for the great filmmaking.