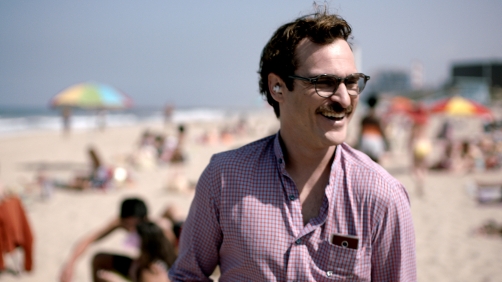 So this film looks completely bizarre. A guy falling in love with a computer Operating System that is apparently sentient? Where can that story even go? And yet apparently it’s supposed to be a really good film. In fact the critic rating on Rotten Tomatoes is 92%, and the audience isn’t terribly far behind at 86%.

I have heard that Scarlett Johansson’s voice work in this film as the OS is second to none. I plan to see it, though the R rating for brief graphic nudity does worry me. Maybe I won’t. We’ll see.

A sensitive and soulful man earns a living by writing personal letters for other people. Left heartbroken after a long love affair ends, Theodore (Joaquin Phoenix) becomes fascinated with a new operating system which reportedly develops into an intuitive and unique entity in its own right. He starts the program and meets “Samantha” (Scarlett Johansson), whose bright voice reveals a sensitive, playful personality. Though “friends” initially, the relationship soon deepens into love.

See or not: Unknown, but apprehensive

This film doesn’t look very good. I’m gonna go with cheesy love story based on the trailer. I really have nothing more to say about it.

In the epic origin story THE LEGEND OF HERCULES, Kellan Lutz stars as the mythical Greek hero – the son of Zeus, a half-god, half-man blessed with extraordinary strength. Betrayed by his stepfather, the King, and exiled and sold into slavery because of a forbidden love, Hercules must use his formidable powers to fight his way back to his rightful kingdom. Through harrowing battles and gladiator-arena death matches, Hercules embarks on a legendary odyssey to overthrow the King and restore peace to the land.

If you were keeping up with MovieByte last year, you might recall that while I did not exactly pan the film and call it worthless or trample it to a million pieces under the feet of my bunny rabbits drawing my weird woodland sled thing, I definitely had some criticism of that film. Indeed, I had criticism even of the whole idea of making a single book into a trilogy. I continue to maintain that this trilogy would have been fantastic as a single film, trimmed to be watchable, inclusive of the parts that are important, and certainly not added unto for no good reason.

I’m spending a lot of time talking about the previous film so let me come to the point. This film is better than An Unexpected Journey. It is better paced, stays more interesting more consistently, and has a lot going for it. It was not better enough to get up into my “4 star” territory, but a decent film and worth seeing. Set the expectations that it’s not the master piece that any of the Lord of the Rings films are and you’ll be good to go. I saw this film twice, once in standard 2D 24FPS and once in 3D HFR. I far prefer the standard 2D 24FPS.

I wrote a reivew, and four of us, myself, Chad, Fizz, and Clark gathered to talk about it on The MovieByte Podcast episode 73.

Regardless, Marry Poppins is quite the well loved classic — Julie Andrews and Dick Van Dyke obviously helping by bringing their enormous charms to the film. And I have found the trailers for this film quite intriguing. While I would not have thought any such film could capture my interest a couple years ago — a film about making a film — this is the second film to do so in recent time. I’d really like to see this. I’m really busy at work, but I’m hoping to make time for it very soon.

This looks really boring to me. It’s also not getting great critical reviews. So, I’ll pass.

Walter Mitty (Ben Stiller), an employee at Life magazine, spends day after monotonous day developing photos for the publication. To escape the tedium, Walter inhabits a world of exciting daydreams in which he is the undeniable hero. Walter fancies a fellow employee named Cheryl (Kristen Wiig) and would love to date her, but he feels unworthy. However, he gets a chance to have a real adventure when Life’s new owners send him on a mission to obtain the perfect photo for the final print issue.