Netflix and Comcast Sitting in a Tree… 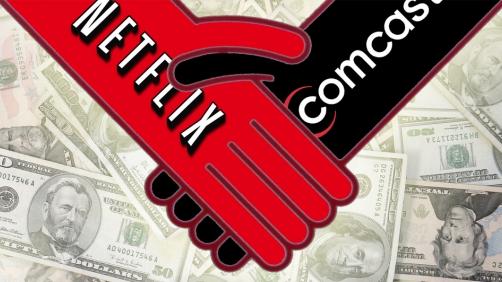 On Sunday, Comcast and Netflix announced a commercial interconnect relationship between the two companies, which is in the very early stages of implementation, and as a result, many who clearly don’t understand how the Internet works are writing about the news. Those who don’t cover network infrastructure for a living should not be trying to explain the technical details behind today’s announcement. Articles from mainstream outlets like TechCrunch, WSJ, NPR,  and many others aren’t even getting the basics right. Words like transit, peering, speed, bandwidth, capacity, etc. are being used interchangeably without any understanding of what they mean.

I mean, first of all, let’s at least attempt to remember that we are supposed to be free market capitalists over here in the U.S. Comcast is a privately owned company who have built and paid for all their own infrastructure. Netflix is also the epitomy of a purebread, built from the sweat of Reed Hastings brow, company.

You do not have a born right to Internet access of a certain, or any type from Comcast, or a right to access Netflix streaming service over Comcast’s network. That is entirely up to the privately owned Comcast who owns the network you are paying them to connect to. If you don’t like it, you can cancel your service with them.

Some are mad at this deal as they say this will start a trend where content owners will need to pay multiple ISPs to have good video quality, which isn’t true. The problem with that idea is that the vast majority of all content owners use third party content delivery networks (www.cdnlist.com) to get the content to ISPs and are NOT trying to build their own CDN like Netflix has. Only Netflix, Microsoft, Yahoo, Apple, Google and a handful of others have built or are building out their own CDNs. Every other content owner out there including MLB, CBS, FOX, Disney, Viacom, NFL, etc. all use third party CDNs. So this has no impact on any of them as they aren’t trying to place servers inside last mile networks and use companies like Akamai, Level 3, Limelight and EdgeCast for content delivery.

Even worse, some want to imply that today’s announcement has to do with Net Neutrality and Tech Crunch went as far to say that the deal “may be legally outside of the traditional net neutrality rules.” May be? Are they serious? Commercial interconnect relationships, also referred to as paid peering agreements, have been around since the Internet started, and it’s how the Internet works.

Those griping and moaning about the Comcast/Netflix deal really have no idea what’s going on. If Comcast were forced to provide the service they are rendering to Netflix for free, Comcast would be losing Money, and Netflix would be getting a free service they would otherwise be paying a third party CDN for. The idea that there is anything wrong with this deal is complete and utter madness.

Many are quick to want to argue that Netflix should not have to pay Comcast anything, but they are missing the point that Netflix is already paying someone who connects with Comcast. It’s not a new cost to them.

They’ve decided to eliminate one of the middle men in delivering content to their customers by giving the content straight to their customer’s ISPs instead of going through a third party CDN or building their own.

Outside of authors who cover networking for a living, I wonder if any member of the media even knows how to do a traceroute. You’ll notice that this whole Comcast/Netflix story broke early as a networking person who isn’t a member of the media, published what he saw in a traceroute. If you write about content delivery, LEARN HOW TO DO A TRACE ROUTE and see  how you get to the source of where the content is being delivered from. If you are too lazy to learn, then you should really stop writing about the subject. I’m no networking engineer, so even for my piece I made sure to speak to those who design, build and connect networks for a living.

Go read this, all of it. And if you had an unfavorable opinion, or thought this was in some way connected to the net neutrality wars (which are also smoke and mirrors, but that’s another topic), then please read this entire article I’ve linked to, and do a whole lot more research. This is simple business, and it’s good for you, it’s good for Netflix, and it’s good for the free market.

And please, for the love of all that is good, try to remember that Netflix and Comcast are privately owned entities who provide a service on their terms to you. You pay for the service, they provide it to you.