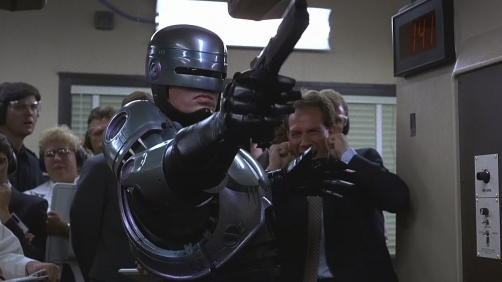 There is a part of me that does not want to write this. For whatever reason, RoboCop seems to be a beloved classic. I really don’t fully comprehend why. Admittedly, near future is one of the hardest types of sci-fi to do. In some ways, far future sci-fi is much easier to write because you can kind of let your imagination go wild, and if you write about a period of time that is well beyond your lifetime, it will be a long time before your stuff doesn’t really work. But the sci-fi is only one of the problems with RoboCop.

So obviously I didn’t like this film all that much, and this sort of thing can often happen because the younger generation comes along and doesn’t understand the context of something, and sees it through an entirely different lens. I freely admit that is probably a large part of the problem with this film for me. Yet I can’t help but feel that viewing through this lens might better shed some light on a film to bring forth either its strengths or weaknesses. There are many older films that I do enjoy very much. So it’s not that I don’t like films that came before “the digital age” or something. So let me try to explain myself.

What Genre Is This?

I think this film may be one of the more genre confused films I’ve seen in quite a while. It wasn’t sure if it wanted to be a comedy, an action film, a “blood, guts, and gore” film, or just a drama. So the film decides to try it’s hand at all the above and fails miserably.

The “blood, guts, and gore” part of the films were often so over the top that they were comedic when they should not have been. ED-209 may be a big old drone with huge guns and lots of fire power, but there was something so fake about it shooting that poor guy. And then, he’s laying there in pieces and Bob says, “Someone call the paramedics.” Really? Way to make light of it.

There’s also the toxic waste scene where bad guy’s skin is melting off. I think I was supposed to be grossed out — and actually I was, just not in the way the filmmakers wanted me to be. I was grossed out by the sheer amount of cakey makeup hanging off the guy.

Clarence Boddicker is such an over the top villain that he didn’t pose much of a threat in my mind either. You see, there’s the genius sort of acting that an over-the-top Heath Ledger can pull off with The Joker in The Dark Knight that makes you fear for your own life because he might just come right out of that cinema screen and grab you next. Then there’s the over-the-top evil that is Kurtwood Smith’s poor excuse for acting and all you can do is yawn and, very occasionally, laugh.

The film at times wants to be an action film, but RoboCop fails to convince me he’s every up to any of the action with his stiff movements and again, terrible acting. When I went into this film not knowing much about it, I expected much more from Peter Weller. But even from the very beginning, before he was wearing the suit, before he was killed and reprogrammed, he seemed to lack any real onscreen presence. Some of this can certainly be attributed to the writing. We never got to know the character before he went into the suit, his relationship with Anne Lewis (Nancy Allen) as a partner and fellow police officer is never really established. Lewis ends up being a character that is simply there, just like RoboCop himself.

In fact I would say the only actor that did a fairly decent job with what he was given was Ronny Cox as Dick Jones. At the time he was not well known for it, but to me he is known for his shady and smarmy villains. But even at that he’s saddled with what I consider to be a trope ridden bad script. I mean really, when he told that guy to threaten the drone, who didn’t see the carnage coming? Cox and his acting barely manages to salvage the scene.

While I’m loosely talking about genre confusion, let’s not forget that this film also tried to be a bit of political satire. Though my opinion is that the film failed, it was supposed to be attacking capitalism, corporate America, and mass media. But it pushed it’s concepts so far that I didn’t buy any of it. The only thing it really got right is the complete and total decline of Detroit (KIDDING… kind of).

I think one of the most frustrating aspects of this film is they tried to sell us on Alex Murphy as a family man without showing us much of his family, his life, or his interactions. It’s supposed to be a moving moment when RoboCop shows up Murphy’s old abode and sees old family photos and belongings and relives memories. Never mind the question, why on earth would these items still be there when the house has been readied for sale by a realtor with the automated home touring system. That just doesn’t make sense, But that aside, the moment falls flat because these relationships were never established. We never got to know Murphy and his family before, so why should we care now?

In all, I found the film to be only occasionally mildly diverting at times, and tedious at most other times. It tries to hard to be too many things and fails at all of them. I was looking forward to this film thinking that it might be fun and I was wildly disappointed. I don’t plan to see it again if I can help it.