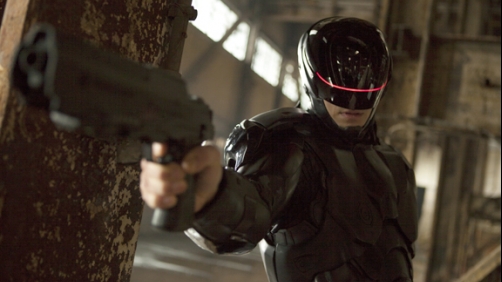 And here is where I’m going to get into unforgivable trouble I’m afraid — at least according to some people. Unlike the original RoboCop, I really enjoyed this film.

I believe that, when you look across the films of history that stand the test of time, the focus is almost always on the story and the characters. My issue with the original film is that they didn’t focus too much on the story and characters. In fact, as I argued, they never really figured out what to focus on.

This modern remake is actually quite refreshing in that regard. The story has been almost entirely re-imagined from the ground up. It is such that I think many would have preferred it if the film had been named something else entirely and the characters had been given all new names as well. It matters not to me, but I think many are evaluating this film on the fact that it doesn’t meet up with their expectations of a RoboCop film. I think that since I didn’t like the first one and didn’t even want this film to be like the first, I have been freed up from that baggage. And when viewed as a film free of that baggage, and you ask yourself is this film any good, I have to come away with a resounding yes. This film is quite solid and it’s certainly one of my more enjoyable times at the cinema this year.

To a large extent, the political satire element that was present in the original film is also present here, but entire refocused on actual problems we are facing. It will be interesting to see if this causes some of the good that I saw in this film to become lost over time — possibly the way the original RoboCop has for me. But I do not think that will be the case because I think the message and things depicted in this film are always relevant.

This film opens with a political show in a somewhat Fox News-ian fashion. Some have even said that The Novak Element is political satire on The O’Reilly Factor. I have watched a bit of that show maybe once in my entire life, I made it exactly sixty seconds before I want to hurl so I removed myself from that situation. Well it may be true that The Novak Element represnted The O’Reilly Factor, but I loved every minute of it. The show was full of political posturing much like you see today, and politicians, politics, and people like Pat Novak (or Bill O’Reilly) really never change.

I think The Novak Element captures so much that’s wrong with our current news outlets and news consumption and I don’t see that changing anywhere in the near future, or even the somewhat more murky waters of the distant future. Getting to see Samuel L. Jackson in this role is also a treat.

Who Watches the Watchers?

In this version of the story, the ED-209 is already in use widely by American soldiers to “keep the peace” in foreign countries. This sounds like the continuance of the meddling nature of the U.S. to me. And this vision of the future is certainly somewhat frightening. As long as you are in compliance, you won’t get blown to kingdom come. Great idea there, not at all frightening.

As mentioned by a U.S. senator opposed to bringing the ED-209 to home soil, these machines get to make unilateral decisions based on logic and programing. They have no emotion, no feelings, and no conscience with with to make a decision. If they make the wrong call, kill an innocent, there is no guilt. In short, the subjugated answer to these robots and they answer to no one.

Elected officials rightly oppose this sort of tyranny in the U.S. This of course leaves a wide gaping whole in the high income market of the U.S., so Omnicorp (manufacturers of ED-209) needs another solution to break into this market. Why not put a man and his brain in a robot so that the electronic device has a face. That should let Omnicorp break into this market.

The Horror of No Body

The way the story unfolds is so entirely different from the original. Where in the original, Alex Murphy dies and is “reborn” as RoboCop, in this film, Alex Murphy is always alive. What makes a person a person? His or her brain, obviously.

So Alex Murphy is wounded in a terrible explosion and will certainly die without the intervention of OCP. His wife signs the papers for them to do whatever they need to do. And they proceed to turn him into RoboCop. There is a particularly jarring scene when Murphy is having a hard time accepting what has happened to him, and so Dr. Dennett Norton (Gary Oldman) has the suit taken apart piece by piece until all that is left of Murphy is his head suspended in the frame, and a pair of lungs held in some sort of see through frame made just for them. It is truly a stomach churning sight.

What is somewhat interesting, even if it’s of no real consequence, is that they preserved Murphy’s right hand. This is the hand that is blown off in the original. Perhaps a back-handed nod (pun intended).

But it is interesting because this is the hand you would normally shake with. Perhaps opening the door for a bit more political RoboCop in the future?

Most surprising to me having watched the original and the remake back to back is just how much better the acting is in the 2014 rendition. On the one hand, you’ve got Peter Weller, known for his screen presence, and on the other you’ve got Joel Kinnaman who’s quite a bit more of an unknown. And I’ve got to tell you, Kinnaman blew Weller right out of the water. I had no trouble connecting with and understanding this new RoboCop. The original, on the other hand, I would call campy.

Stealing the show was Gary Oldman as Dr. Dennett Norton. He easily portrays an emotional struggle of a scientist who wants to do good and meaningful work, and the moral dilemmas his boss puts him in. Ultimately, he’s pushed to do much more than just help the man, but to make the man a machine — and he successfully does this, which causes him great consternation. In my book, Oldman is one of the great actors of our modern era, and this is no exception.

I can’t say that I’ve seen Michael Keaton in much, but he’s really fantastic here. And as the villain, his motivation and character in general is much more clear than the multiple villains in the original.

What mattered to me most about this version of RoboCop is that the story worked so much better. The arch of Alex Murphy resonated so much more. He’s alive, his family is around, he has something to live for, he’s struggling with man vs. machine, and he’s not sure who he is. This film was not afraid to differ from the original in whatever way it needed to and did not feel saddled to “remake” the old film which I found refreshing. Yes at times it did give nods but that was pretty much it.

The theme RoboCop is dealing with here is, who’s really in charge? Can he now be more than he’s programmed to be or is he just a pawn?

My complaints with this film will be somewhat familiar if you read many of my reviews. Mainly that any time there was action going on, it was mostly incomprehensible. It’s 2014 people, can we please have properly choreographed action? I want to be able to tell what’s going on. Filming things wildly with what feels like no purpose and a lot of camera shaking and cool lights flashing all over does not an action sequence make. Thankfully, the film is about much more than that, but really, come on guys!

My other complaints have to do with two plot contrivances:

But my issues with the film are quite minor. While the original felt like a B movie on steroids, this film feels like a fully realized vision with A grade acting, an A grade script, and far better performances than anything in the original. I quite enjoyed it and I highly recommend you give this film a chance. It might well surprise you.