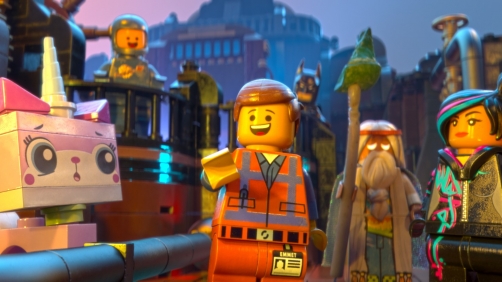 Back when I was a kid — geeze, listen to me, don’t I sound old? Anyway…

When I was a kid I loved to play with my LEGOs. I built so many things with LEGOs that I couldn’t possibly remember them all. The thing that I almost always had built and never took apart was a construction that crudely resembled the (original) Starship Enterprise, but that’s another story. I will tell you that in the mid to late ‘80s and early to mid ‘90s, we didn’t have all these fancy LEGO contraptions that “kids these days” have. We had generic LEGO men, and we had bricks of differing colors and differing sizes and that’s pretty much it. These days kids get kits that build specific things and they follow the instructions to achieve them. Sure in my LEGO playing days we had a very few kits like this but for the most part we had bricks and we built whatsoever our creative child minds could fashion.

I would say that in the back of my head, I had perhaps equated this movie to the same level of fun-ness that Wreck-it Ralph had been for me. While The LEGO Movie was great, it did not quite live up to exactly that level. But it is a good film as I hope you will agree.

How Does It Snap Together?

The basic plot is actually fairly simple, and I’m definitely not saying that’s a bad thing. Overcomplicating such a film would have been a great downfall.

We begin with Lord Business (Will Ferrell) and Vitruvius (Morgan Freeman) arguing over “The Kragle” which is an evil substance that will allow Lord Business to control the LEGO world. Lord Business makes off with the substance, Vitruvius makes a prophecy about a special Master Builder who can save them all, and the story begins. Next we visit Emmet (Chris Pratt), the hapless everyman of this LEGO world who thinks everything is awesome, who always follows instructions and never does anything wrong or out of the ordinary. But when he accidentally finds the The Piece of Resistance his life suddenly takes a dramatic turn as he tries to live up to the “Prophecy of the Special.” But Lord Business is intent on releasing the Kragle, which will glue all of the universe together and freeze it in place so that everything will be exactly the way Lord Business wants it to be.

I think the thing that delighted me the most about this film is the full commitment to LEGO. I mean sure, you’ve got LEGO characters, and LEGO bricks that the characters use to build things. And you’ve got standard LEGO parts like wheels, hair pieces and more. But what I’m talking about is LEGO lava, LEGO mountains, LEGO ocean, LEGO shower water, LEGO soap suds, everything in this world is built out of LEGO. The commitment to go all the way with this is just delightful. It may sound and seem cheesy, but I think to those of us who have created entire worlds out of LEGO sets and used little pieces, big pieces, and parts of every kind, size, and shape to build everything under the sun, we totally get it and connect with it. It would have been so easy for the water to just be CGI water, for the soap suds to be just soap suds. But instead, we are completely immersed in the LEGO world and the effect is quite amazing.

I think perhaps my favorite thing about this movie is the characters. That may indeed almost always be the case with a good film, but it’s noteworthy because I think that’s where films can often start to fall apart, even when they’re really just a lot of silly fun. If there are no good characters, there is no good film behind it.

The film starts off right off the bat with Morgan Freeman’s Vitruvius… doing comedy. No, really. It works quite well actually. His first line, indeed the first line in the movie is, “He’s coming. Cover your butt.” There are very few serious lines from Vitruvius, but delivered in that deep velvety voice, there’s something about it that is simply hilarious. Will Ferrell’s Lord Business is equally as fun and sinister as he intones things like, “clear my schedule, this next meeting could go… DEADLY!”

The obvious star of the show is, as I say, obvious: the utterly ordinary Emmet. But he’s no less endearing just because he’s obvious. At first he seems ordinary, and he is utterly ordinary. But as the film progresses, we discover that we love him, and that he loves the people he has come to know over the last hour, and that he is, in his own way a special person. He learns to think for himself where it counts.

Two honorable mentions for great characters are Liam Neeson’s Bad Cop, and Will Arnett’s Batman who is just perfect.

What Are They Building?

While this movie may on the surface seem like it’s just a good bit of fun with LEGOs, there’s actually a great message behind it all. Lord Business’ main problem and motivation for being evil is he’s a conformist. He wants everyone to have a specific purpose, to follow the instructions, and to build only what they are meant to build. He doesn’t want things out of place, he doesn’t want weird things being built. He doesn’t like what he thinks of as chaos. But any of you who played with LEGOs (and which of you didn’t?) know that the fun of LEGOs is you can build whatever you want. You can also mix and match sets. And sure it’s fun to follow the instructions and build the exact thing that’s on the box of the kit you bought, but the real fun comes when Han Solo and Lando Calrissian visit Captian Jack Sparrow in Radiator Springs.

But if Lord Business gets to release the Kragle and glue everybody in place, all that fun ends! Emmet must learn to think outside the box and realize that you don’t always have to build exactly the same thing as everyone else. You don’t have to be a conformist, and the world is actually a better place if we aren’t all exactly the same. The obvious message is fit in, don’t fit in, whatever, but be the person that you are best suited to be.

And for heaven’s sake, take the LEGOs and make cool things because that’s what you’re supposed to do!

Alright, look, I know I’m going to catch some flack for this, but the part of this movie that’s set in the real world just didn’t work for me. I know, I know, some people think this is what makes the film endearing and gives it the heart of gold that it has, but I found it sort of off-putting. I was happy believing that we were simply in an all LEGO world, and I was happy to buy the trappings and rules of that world. Even though the film was capturing the spirit of what it is like to play with LEGOs, there was still a quality of complete and total, delightful fiction to it. But suddenly, we’re thrust into the real world where the kid is playing with his father’s elaborate LEGO set and the world seems less cohesive. And suddenly, Emmet can’t move or do anything? We can hear him thinking, and finally, if he thinks hard enough, he can sort of flip himself around and off the table… This just didn’t work for me at all. I wish we would have just stayed immersed in the LEGO world and resolved the plot there in some way.

It’s not that the moments here weren’t touching and the message wasn’t good, but it felt to me like it lacked cohesion with the rest of the film. It felt out of place.

But don’t let my one complaint put you off from the film. Whether it’s a good rule of thumb or not, I often do tend to judge a film by how many emotions I felt while watching it, and believe me, I ran through a wide gamut of emotions for this film. I didn’t actually cry at any point, but I do particularly remember my eyes getting a little misty once or twice. And at other times, boy did I laugh. In fact, I would also say that, yes the kids in my audience enjoyed the film a lot, but us adults enjoyed it even more. Some of the heartiest laughs came from the three adults to my right. And with good reason.

This film is going to be one of the greats as we move forward. I have no doubt that it will be elevated to “classic” status along with a few of the other great animated films in history. And it’s well worth you taking the time to watch it. If you have children, take them because they’ll love it. And if you don’t, go see it anyway because you will love it!