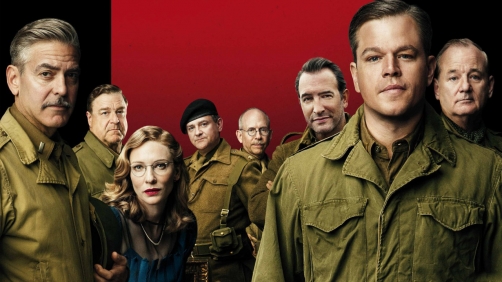 I believe a film like Monuments Men is important and has cultural significance, or at least it can have. And I certainly believe that preserving the art of the ages is a worthy endeavor.

On top of a worthy endeavor and the historical context of a film based on true events, a lot of star power was also brought to bear in this film. You’ve got George Clooney in the directors chair and acting, Matt Damon, Bill Murray, John Goodman, and Cate Blanchett. As you may have guessed from my star rating however at 2 of 5 stars, I did not really care for this film that much. So what happened. Well that my friends, is what I shall attempt to answer. But first…

The film tells its story in a no frills, no fuss sort of way. Nothing really crazy ever happens, and the focus is on the primary objective: is the art worth it? The answer of course, is yes. The whole reason for war is to preserve culture and way of life. Art shows where we have been, what a culture represents, the significance of that culture which came before. What compels us to create art in its various forms? And what does it say of us if we don’t fight for and protect it? I am certainly no master of art (at least as far as painting, sculpture and the like go) but even I can recognize the significance.

And in that respect the men depicted in the film were certainly heroes. Hitler aspired to many things, and owning/maligning the art of many cultures was one of them (though, not as the film depicts, was destroying the art in the case of his demise one of the things he wanted — but the film had to have some drama you know).

Cate Blanchet was also top notch, even if I had some trouble with the writing surrounding her and her interaction with Lt. Granger. But as usual, Blanchet proves her incredible range and ability to completely convince you in the role she’s in. I believe completely that this Australian actress who has played an elf from Middle Earth, a soviet psychic working with the german Nazis, the all American spitfire actress Katharine Hepburn, and a proper English woman, Lady Gertrude Chiltern, could indeed be a french woman from the World War II era. She was by far and away my favorite actor in this film.

Quite unfortunately, the idea of the Monuments Men, as in plural, is all but pushed aside in favor of breaking up the group on episodic missions. And we can’t really fall on the excuse here that the film is following the basis of a true story for it is only loosely based on that story, and so much license is already taken with the story that the original is quite distorted anyway. No, this is purely bad script writing. I never felt any bond or connection between the men. The film utterly failed to convey any sense of camaraderie, mutual respect and admiration, or any really deep meaning between the men, even though it at times seemed to fall back on its assumed presence in the film.

Instead what we have is the film skipping around to the pairs of men it has broken off. Often what they are doing or attempting to do is not explained and makes little sense. Many times George Clooney is driving around looking for Colonels, handing them his and their orders, and being rejected. You would think he could get them court martialed for failing to obey orders and deliberately obstructing him from obeying his. But instead, he just drives off to find someone else for reasons that remain unexplained.

Toward the end of the film, Lt. Granger (Matt Damon) steps on an unexploded land mine. He calls in Lt. Stokes (George Clooney), who proceeds to ask him why he would go and do something like that. It’s a fine little moment of comedic relief. But then Walter Garfield (John Goodman) comes in and asks the exact same question and Granger says something to the effect of, “you guys have been spending entirely too much time together,” only they haven’t. They’ve spent hardly any time at all together. It falls completely flat.

At an earlier point in the film, one of our “heroes” is off on a mission by himself. The CO of the unit he’s with is quite a bit less than cooperative about the orders to save art so our hero runs off by himself, gets killed, and fails to save the piece of art in question. Never are we told or shown why this sacrifice is important or necessary. It just ends up being pointless.

Now look, I don’t need explosions and CGI in a film to make it work for me. In fact many of my favorite films have had little to no action in them at all. So when I say this film is boring, it is by no means because of a lack of action. For me it is rather the meandering from scene to scene with very little apparent purpose. I often never understood what motivated the characters or the scenes they were in. With the exception of one scene, the film utterly failed to cause any emotion to be stirred in me. This is death of a dramatic film. In order to sustain a film that has little action it must convey emotion.

And as to the bad writing I alluded to earlier, as with our Monuments Men heroes, I never felt the connection between French woman Claire Simone and Lt. James Granger. And so when she makes a half hearted attempted at a pass at him (it’s Paris, you know), it feels so completely flat and devoid of any real temptation to Granger that I was shaking my head. He reminds her he’s a family man (a family we’ve never met and yet another connection we have not established), and leaves.

In short, the script seems to be infused with a sense of self importance that it never earns and because of this it falls flat on its face.

Find Something Else to Watch

I wish I could like and recommend this film. I think the concept is sound but this film simply fails to live up. Instead of living up to its own high standard of the art the Monuments Men are trying to save, it falls woefully short. There are many other World War II films you could stay home and watch instead and be much more satisfied.